Yow Yeh banished to Norths for sleeping in 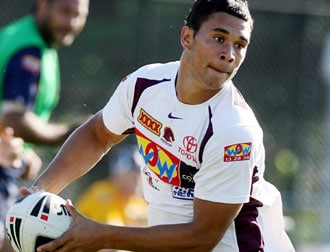 Brisbane Broncos Test winger Jharal Yow Yeh has been banished to feeder club Norths after sleeping in on Australia Day.

Coach Anthony Griffin told the 23-year-old excitement machine not to bother coming back the next day after he arrived late to a Brisbane training session last Thursday. Instead, Yow Yeh was ordered to report to Norths coach Craig Hodges.

Yow Yeh faced up to two weeks at Norths and a possible Intrust Super Cup trial for the Devils, but was effectively given a reprieve by his selection in the Indigenous All Stars team.

While he had to train with Norths last Friday, Yow Yeh has been allowed to go into camp with the Laurie Daley-coached All Stars team on the Gold Coast and will likely resume Broncos training on Monday.

There does, however, remain a chance of further disciplinary action.

“I’ve never had a problem before with Jharal but he was careless in this instance, and he has to serve his penance,”Griffin said.

“I’m a very big fans of his, as a player and a person.

“Because of that, I have high expectations. But that is the case with every player at the club, and there are no exceptions to the rule.

“Unless they have a valid reason, being late for training is just not acceptable. ”

Yow Yeh admitted on Monday that he had made a mistake.

“I put my hand up for that,” the winger said.

“We set high standards at the Broncos, and no one is above the rules.

“I’ve copped it on the chin and it’s up to me to prove myself at training, and that’s what I plan to do.”

Hodges, who has replaced Trevor Bailey as coach at Norths, said he could not fault Yow Yeh’s effort on Friday.

“He was sensational,” Hodges said.

“I can understand the Broncos stance, given that at that level discipline is so important and you just can’t afford to be five minutes late.”