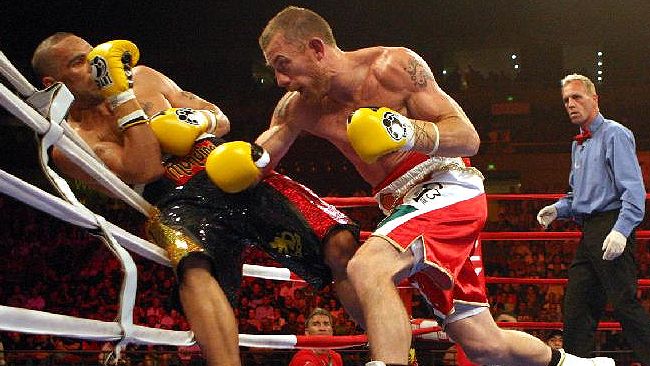 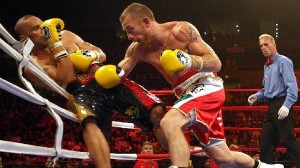 When Garth Wood worked as a brickie’s labourer, a garbage collector and a cleaner, he couldn’t afford to take his family on flash holidays.

On Tuesday, he stepped back into the gym to prepare for a rematch with fallen champion Anthony Mundine, having just returned from Hawaii, Las Vegas and Disneyland courtesy of the prizemoney from his stunning win over Mundine in December.

Wood’s manager has been negotiating with the Mundine camp since the new year and an announcement on a date in April and a venue for the rematch is expected within 48 hours.

The last sticking point is that Mundine wants the fight on the Gold Coast but the Wood camp is pushing for Sydney to fight in front of his army of hometown fans.

“I promised the kids we’d go away if I won the fight,” Wood said.

“It was a fantastic break, but I’m back in the gym today.

“I’m as hungry as ever and I’m looking forward to whatever comes up this year.”

Once a huge admirer of Mundine, Wood no longer has much time for the fading world champion or his manager Khoder Nasser.

And he’s not saying that to create hype and ticket sales for the bout against his former friend and idol.

“It’s not the same as it used to be,” Wood said. “And that’s the way it has to be when you’re fighting someone.

“Doing deals with them can be a real headache.

“They don’t want the fight in Sydney because they think they’ll get more pay-per-view customers if we do it somewhere else.

“But we’re both Sydney boys and the fight has to be here where there’s so much interest. All the people who don’t like Mundine will turn up and support me like they did for the first fight.

“And those who don’t turn up will buy the fight on TV because they want to see me beat him again.

“There are a couple of points that need to be sorted out, but we should have a deal done within 48 hours.”

The fight is expected to net Wood a pay packet of close to $1 million from ticket sales and pay-per-view customers.

It’s a far cry from the salaries he’d been earning over the last decade in various other jobs.

“I’ve been a brickie’s labourer, a garbo on Marrickville Council, I’ve worked on the wharves and I used to be a cleaner,” he said. “I really want to use this next fight to set myself up for a world title and the bigger paydays.”

Former world champ Jeff Fenech, who was in Wood’s corner for the first fight, has no doubts the former Rabbitoh can do it again.

“In fact it will be much easier,” Fenech said.

“Mundine is going backwards and Garth is going forwards.

“He’s got a lot of improvement in him.

“Garth has done it once and he’ll do it again.”