Who is Australia’s fastest footballer? 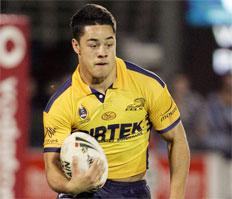 Jarryd Hayne has gone all out in his bid to be crowned Australia‘s fastest footballer – employing Olympic sprint hero Matt Shirvington to work on both style and starts.

The 2000 Sydney Olympics semi-finalist is convinced he can provide Hayne with that extra edge required to beat a red-hot field from the NRL, AFL, Super 14 and A-League.

“There’s no football to carry any more, no boots to wear or oncoming defence to worry about, and he’s running on a track rather than a soft, uneven grass paddock.

“But the biggest challenge will be coming out of the blocks with power and that’s where I can help most. I’ll be teaching Jarryd how to split the power in his legs when coming out, how to position his hips forward and making sure he actually gets through all the gears before popping up entirely.

“All little things that can make a big difference.”

TAB Sportsbet has framed a hypothetical market for the event, with NSW Waratahs star Turner on the top line of betting at $3.50.

“Lachie’s been coached by Australian Olympian Peter Burge, which shows in his great style,” Shirvington said.

“He has really carried through those techniques Peter taught him early on.

“Jarryd also has an outstanding sprint technique – uses his arms well, brings his hips through – while Greg is a different creature altogether.

“He’s a taller guy so I’d expect him to feature more heavily at the finish, especially if he finds his rhythm.”

Josh Morris has the genetics and physical attributes required for running fast times on the track, while Shirvington also expects Dempsey and Gosford smoky Lewis to be right in the mix.

Buford Balony says: Who will win this? If I was in it, I would. I have form as my colleagues know…that mammoth win from the P.O.W. around the roundabout & back in Bunbury. What a race!!!!!