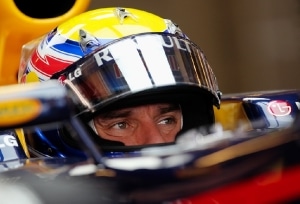 While many will argue that Mark Webber’s chances of winning the F1 world championship ended in qualifying for the Abu Dhabi Grand Prix, any last vestiges of hope disappeared for good when he was forced to make a pit-stop for tyres on lap eleven of the season finale.

The Australian had used his supersoft tyres more than most in qualifying, taking five laps to post his best time, and they began to give up the ghost in the early laps as he gave chase to title rival Fernando Alonso.

A brush with the barriers at turn 14 may not have done too much damage to the RB6, but prompted Webber to consider a change of rubber, even though the move would almost certainly drop him out of contention.

Fifth place became 16th but, crucially, left Webber behind Nico Rosberg, Vitaly petrov and Jaime Alguersuari, who had all taken the opportunity to pit for their tyre change during an early safety car period.

Ferrari, keen to ensure that Alonso kept tabs on Webber – who went into the race eight points adrift of the Spaniard – pitted the double world champion not long afterwards, even though he suffered the same fate as the Australian and opened the door for Red Bull’s Sebastian Vettel to take the title as they proved unable to find a way past the resilient Petrov.

“It was a big day and we had the chance to do something incredibly unique, but in the end it didn’t turn out for us,” Webber sighed, “Earlier in the race, we knew we had to roll the dice and go for it with the strategy, but it left us exposed – and Fernando covered us anyway. I tried my absolute hardest and we did everything we could but, in the end, it wasn’t enough.”

Having led the standings for longer than any of his rivals in a season of consistency blighted late on by the costly retirement in Korea, Webber was understandably disappointed to have come so close to achieving his life’s goal – and no doubt realised that it may have been his only shot at the crown.

“I was in with a chance of winning the championship until the last race, so I must
have been doing something right and, in the end, there are a lot of positives,” he admitted, “I feel I have driven very well for most of the season and that’s the most important thing to me.

“This weekend didn’t turn out and it’s a shame, but it’s a good time to reflect in the next few weeks and look back at the highs and the lows. That’s the way the sport is sometimes.

“There have been quite a few emotions over the last couple of weeks and, hen you
come so close to the top and just miss out, it’s a shame, but I tried my absolute hardest. I have great guys around me, and I’ll be fighting again next season..”

Despite the acrimony that has afflicted their season at times, Webber conceded that his young team-mate had earned the title.

“You’ve got to take your hat off to Sebastian, he’s done a great job all year and to lead the championship at the last race, he’s got the timing right,” he said, “I fully congratulate him on the world championship, and I think two championships for the team is not bad.”

Eighth place in the Abu Dhabi Grand Prix ultimately dropped Webber to third in the final standings, and only two points clear of fourth-placed Lewis Hamilton, who chased Vettel to the line at Yas Marina