Was Sepp Blatter given a ‘bung’ before he was President of FIFA? 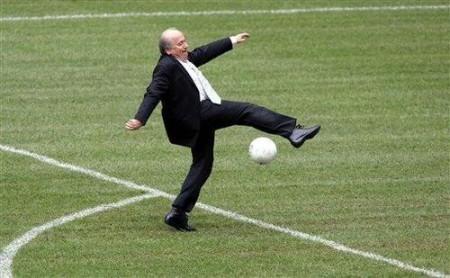 On the day that Sepp Blatter reiterated his pledge to rid FIFA of corruption, if it existed, he revealed that he was given an envelope of cash before becoming president in 1998.

The 75-year-old will present proposals to the FIFA Congress next week on dealing with past allegations of corruption and ticket touting by senior FIFA officials.

Blatter is keeping the details secret, but they include allowing the congress – made up of all 208 member countries – to elect the chairmen of three key committees.

Blatter insists that he has never been involved in any corrupt practices, but did reveal that he had been targeted for a bribe before he became FIFA president, stopping short of naming the person involved.

“I received once an envelope, when I was secretary-general, and in this envelope there was an amount of money,” he said.

“I couldn’t refuse because he put it in my pocket. I came home here to FIFA and gave it to the finance director and he put this money on the account of the Swiss Bank Corporation at that time, and informed the guy, ‘The money you gave to the secretary-general is in that bank,’ and a few days later he reclaimed it. Then it was specifically known that please don’t try to give money to somebody who’s in FIFA.”

Blatter’s campaign to be re-elected as president has been overshadowed by the latest accusations of bribery and corruption within soccer’s world governing body, specifically related to the decision to award the 2022 World Cup to Qatar.

Qatar officials described allegations that they paid bribes in return for votes as “distressing, insulting and incomprehensible” and attempted to discredit the whistleblower who is now being investigated by FIFA.

A statement claimed that the whistleblower, who provided The Sunday Times with information, was probably an “embittered” ex-employee “with a significant axe to grind.”

Blatter said he was “disappointed” to hear that Amadou Diallo, a former FIFA employee and a close friend of Mohamed bin Hammam, Blatter’s rival for the presidency, had been named in the UK Parliament as the “fixer” of bribes paid by the Qatar 2022 World Cup bid to two FIFA executive committee members – allegations that are also denied.