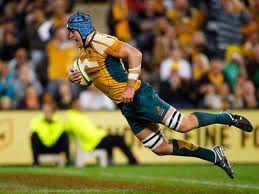 Wallabies captain James Horwill wants to use Friday’s third-place playoff against Wales as a shot at some small measure of redemption after the bitter disappointment of losing to the All Blacks in the World Cup semifinals.

The bronze match is usually the least anticipated at the World Cup, with two losing semifinalists competing at the end of a long tournament and without any trophy on the line.

Wales upset the Australians in the corresponding match in 1987 at the inaugural World Cup after the French beat the Wallabies in the semifinals.

Wales didn’t return to the last four stage again until this year, while Australia won World Cup titles in 1991 and ’99.

“The reality is we’ve fallen one step short to a very good New Zealand side,” Horwill said on Monday. But, “it’s a good thing we’re playing so soon.

“You can sit and dwell on these things now. The fact in four days time we get a chance to pull on the jersey and finish off the tournament on a positive note is a thing that’s going to drive us. We want to finish this tournament on the right note, and that’s by finishing third.”

The Wallabies are carrying injuries, with prop Sekope Kepu, lock Dan Vickerman, centre Pat McCabe and hooker Stephen Moore hurt in Sunday’s 20-6 loss to the All Blacks and at risk of joining fullback Kurtley Beale on the sidelines.

Australia coach Robbie Deans expected there’d be changes to his starting line-up to take on Wales, which will be missing captain Sam Warburton after the inspirational flanker was red carded for a dangerous tip tackle in the 9-8 semifinal loss to France.

“Very likely there will be change, quite simply off the back of the burden the core group have had,” Deans said. “There are some pretty battered bodies.”

He wouldn’t be drawn into what changes there’ll be, or if Quade Cooper would start after unimpressive performances in the knockout stages, saying only he had to “deal with the fit bodies and make your decisions from there.”

Deans said the World Cup couldn’t be considered a success for the Wallabies because of the semifinal loss, but it was important to finish with a win.

“It’s good to be able to play again. Players that get to the semifinal are pretty excited about that prospect – what lies ahead,” he said. “But if you lose, you’re devastated as well.

“To have the opportunity to step back out there and move on from that disappointment is possibly a good thing.”