The Australian Rugby Union continues to dominate its war with French rugby after securing the services of key duo Drew Mitchell and Ben Alexander until the end of 2013.

The pair’s decision to reject lucrative offers to play club rugby in France lifts the number of Wallabies that have re-signed to four in five days after Stephen Moore and Adam Ashley-Cooper also inked new deals last week.

Mitchell, who has also signed on with the Waratahs for a further two seasons, says the chance to be a part of an exciting Wallabies era was too good to pass up.

‘I’ve been fortunate enough to have been involved with the Wallabies since 2005, but while I’ve had some great experiences in that time, we haven’t been able to win any of the big trophies like the Bledisloe Cup, the Tri Nations or the World Cup,’ Mitchell, a veteran of 55 Tests, said.

‘I really feel, with the progress that we’ve made as a team in the last two years especially, that we are capable of winning those tournaments.’

‘I didn’t want to leave without having given myself the best shot to share in those experiences.’

‘We’re now starting to win games in circumstances that we haven’t been able to overcome in the past.’

‘That’s a pretty good indicator for me, both of the progress the team has made, but also of the potential that remains.’

‘I’d like to think that the best is yet to come, both for the Wallabies as a team,but also for me personally, in terms of my own development as a player.’

Alexander, who will also remain with the Brumbies until the end of 2013, 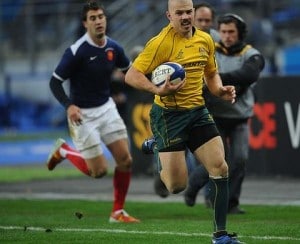 admits he considered heading overseas but says the feeling of unfinished business made his decision an easy one in the end.

‘I was very thorough about it and explored all of the options because it was a significant decision in terms of my career,’ the 24-Test prop said.

‘I drew up a set of criteria around what was important to me and that helped out a lot. Once I had gone through the process, the decision to stay was easy.’

‘We’ve done a lot of hard work with the Wallabies over the last three years to get to this point in our development.’

‘There’s still more to come – possibly the hardest work still lies ahead – but I think we all sense that we are on to something good, that the best of the team is still to come.’

‘Walking away from that wasn’t really an option.’

‘The most pleasing aspect of the past week is to hear how our leading players are still driven by the desire to make the Wallabies the best in the world, that they feel a sense of unfinished business until the goal is achieved, and that the opportunity to play against the Lions is so appealing,’ O’Neill said.

‘They are No.2 in the world but still not satisfied. I think all Australian Rugby fans will be heartened by their commitment to continue improving and returning precious metal to the trophy cabinet.’