UGLY…Poms don’t know how to play any other way 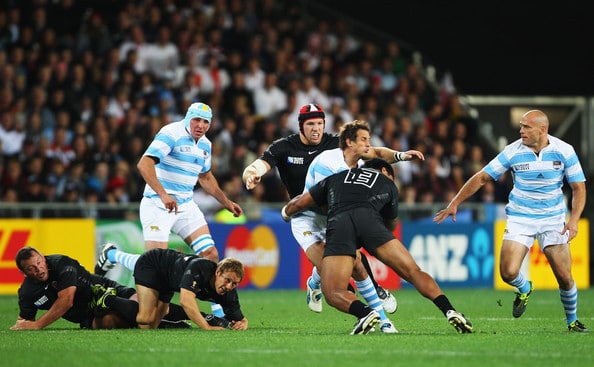 England would rather “win ugly” than risk a loss to Scotland in the old rivals’ Rugby World Cup 2011 clash, according to halfback Ben Youngs.

The northern teams’ onus on defensive play and kicking is often derided by attack-focused southern hemisphere sides but the No.9 insists “it’s all about winning”.

The clash is expected to be played in Six Nations-style rain and cold and, with both teams’ World Cup campaigns on the line, Youngs warned spectators to expect some down and dirty drudgery at Auckland’s Eden Park.

“Each team will try to attack and score but at the same time when games are so tight, often you end up becoming quite condensed. So it’ll be interesting,” Youngs said.

“I’d rather win ugly than lose playing with ambition and flair and at the weekend, it’s all about winning.”

England looked impressive in their 67-3 rout of Romania, running in 10 tries in pristine conditions under the roof of Otago Stadium, but Youngs said Scotland demanded a different game plan.

“We played under the roof and you were able to offload and chuck it around a bit more,” he said. “I think it’s due to rain at the weekend and we’re fully aware of the weather and the conditions.

“Guys have played enough at Premiership level and Heineken Cup level in wet weather, so as long as we’re smart with that I’m sure we’ll play the right game and make sure we’re not forcing things.”

Scotland are fighting to keep their world cup hopes alive in the wake of their 13-12 loss to Argentina, while England also need a win to make certain of topping the pool and securing a likely quarter-final against France.

“I expect the forwards will go hammer and tongs at each other and we’ll see who comes out. But I’d always like to be behind our pack.”

Discipline will be a key issue, Youngs conceded, with Chris Paterson and Ruaridh Jackson dangerous on penalties for Scotland.

“We’ve got to be whiter than white and we’ve got to trust our defence. We’ve only conceded one try in three games so there’s no reason why we can’t let them have the ball and keep playing for our tackles,” Youngs said.

“We’re three from three, no other team’s that. We’re the ones who should be confident, we’re the ones in control. It’s not arrogance, it’s just the fact that we’re playing well, we had a good result at the weekend,” he added.

“Scotland are the ones who have got to come out and play, we’ve got to make sure we do what we do and hopefully that should be enough.”

Buford Balony says: The only way they can win is ugly because they can’t play any other way. I was at the England v Argentina game and it was the worst, most boring sporting contest I have ever been to, no matter what sport.