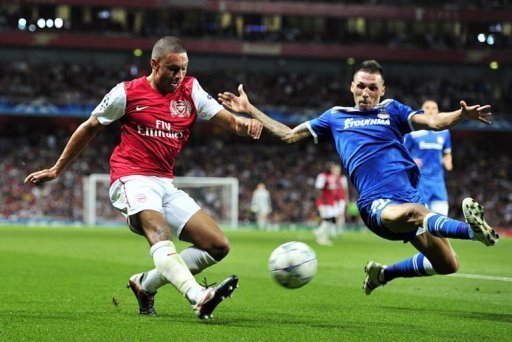 Arsenal and Marseille have set aside their poor league form to record valuable home wins in UEFA Champions League group matches on Wednesday.

Arsenal edged Greek side Olympiakos 2-1, while Marseille, who have just one league win all season, pulled off an impressive 3-0 victory at home to German champions Borussia Dortmund.

Marseille top group F with six points from their two matches, while Arsenal are second with four points.

Defending champions Barcelona, meanwhile, eased to a 5-0 win away at BATE Borisov to top group H, Lionel Messi scoring twice in the rout to take his overall tally for the club to 194 goals, level with Hungary legend Ladislao Kubala in second place in Barca’s all-time list of leading scorers.

Only Cesar Rodriguez – who scored 235 goals in the post-Civil War era – is ahead of Messi, but the Argentine seems certain to eclipse him in the near future.

AC Milan, who grabbed a last-gasp 2-2 draw with Barcelona in their opening group match, overcame Czech debutants Viktoria Plzen 2-0 at the San Siro, while Valencia drew 1-1 at home to Chelsea.

Chelsea looked like they were on their way to their second win in group E when they took a 1-0 lead, Frank Lampard scoring an excellent goal on a rare start, but Valencia claimed a deserved draw four minutes from full-time.

Salomon Kalou was penalised for handball and Roberto Soldado made no mistake from the spot. 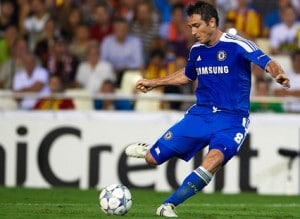 Lampard’s performance earned praise from Chelsea manager Andre Villas-Boas, who had reacted angrily on Tuesday at a question as to whether the veteran midfielder had a future at the club.

“It was a good performance from Lampard and there is nothing more to say,” the Portuguese coach said. “He is one of the best players in our squad and I was very happy with him. The team worked well collectively and individually and so I was very happy.”

Having gone down 2-0 to group leaders Chelsea at Stamford Bridge a fortnight ago, Leverkusen picked themselves up from the defeat with midfielder Lars Bender scoring the opener in the first half.

Ballack, who turned 35 on Monday, netted the second in added-time to claim his first goal in more than 18 months, having spent much of this football season on the bench due to the after-effects of back-to-back injuries in 2010.

Arsenal made a roaring start against Olympiakos, easing to an early 2-0 lead with goals from 18-year-old Alex Oxlade-Chamberlain and recent Brazilian signing Andre Santos, but dreadful Gunners defending gifted Olympiakos a way back through David Fuster.

Arsenal goalkeeper Wojciech Szczesny and the woodwork then combined to prevent Olympiakos snatching a draw.

Marseille owed their victory to Ghanaian star Andre Ayew, who scored a double, and Loic Remy.

Barcelona had wrapped up the three points by half-time, as they outclassed their Belarussian hosts.

The hosts hardly helped their cause with an own-goal to make it 1-0 and goalkeeper Alyaksandr Gutor dropping the ball onto Messi’s head for their third.

The Argentine maestro added another early in the second-half with a rasping drive to make it 14 goals in 10 matches this season.

Milan made heavy weather of the first half against their Czech opponents, but goals from Zlatan Ibrahimovic and Antonio Cassano in the second-half gave them the breathing space they required.

Russian champions Zenit St Petersburg had earlier bounced back from their surprise opening defeat to APOEL Nicosia by beating 10-man Porto thanks to a double by Roman Shirokov.

APOEL, though, remain on top of the group as they drew 1-1 away at last season’s quarter-finalists Shakhtar Donetsk.