Twenty20 will take over cricket 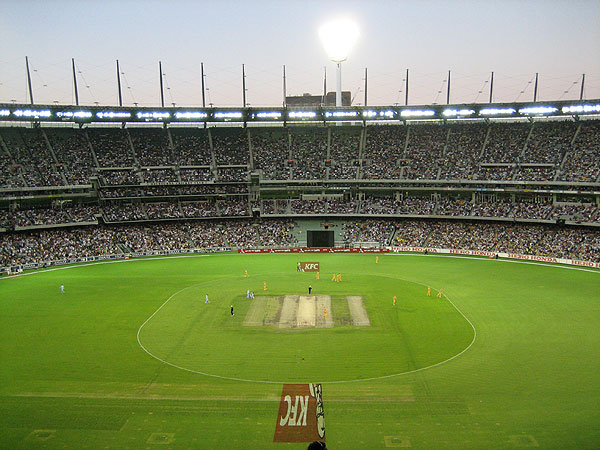 Cricket Australia‘s board wil vote on a proposal to axe the Sheffield Shield final and reduce the states’ one-day competition in a move designed to clear the calendar for two lucrative Twenty20 tournaments.

The idea has upset senior players and comes at a time when the once world-class domestic four-day competition is struggling to produce Test-standard cricketers.

National coach Tim Nielsen pointedly decided not to send Mitchell Johnson back to state cricket when he was dropped after the first Ashes Test, because he said the gulf between it and Tests was so large that any results achieved were distorted.

The Sheffield Shield final, introduced in the 1982-3 season, is the only domestic five-day game on the calendar.

The board will be told that because of commitments to the Twenty20 Champions League in October and the introduction next season of the new eight-franchise Big Bash, the only way to accommodate all the fixtures is to reduce the number of Ryobi Cup one-day games and drop the Shield final.

“There is a discussion about domestic programming and as part of the discussion about how you create space for the new Big Bash league with the new eight teams, one of the suggestions is that there not be a Sheffield Shield final,” Young said.

“That would allow an extra week in the summer to allow the program of Sheffield Shield, Ryobi Cup and Big Bash league.”

Young explained that next season’s Big Bash will feature eight city-based sides and Cricket Australia doesn’t want the players to have to decide between state contracts and the partly privately-owned franchises of the new teams. The proposal to the board is that Shield finals have not always been competitive.

Test players are still angry that Doug Bollinger was not released from the Twenty20 Champions League by Cricket Australia to prepare for the two-Test series against India in October.

The bowler only had two days’ practice before the Mohali Test and broke down on the last day of the match which Australia lost for the want of one wicket.

Ricky Ponting said later that Bollinger’s loss affected Australia’s ability to win the Test, and physiotherapists said his lack of preparation contributed to the injury.

The consequences of the decision not to release him from his contract with the privately-owned Indian franchise meant that Bollinger then missed the first Ashes Test because he was deemed to be underdone.

The bowler then managed only 20 overs in a Shield innings before the second Test and his fitness let him down in the field during the searing heat.

One senior player told The Australian that the standard of Shield cricket had fallen in recent years and would deteriorate further if the final was dropped.

“If you do that states will start producing result-based wickets so they can pile up the points,” he said.

“That will mean bowlers get an easy run on greentops and the standard slips. The beauty of Shield cricket in the past was you had to grind out runs and wickets but there is no doubt in my mind the standard has slipped compared to what it was 10 years ago.”

The cricketer argued that you would only have to ask the NSW players how much they value their two recent away-from-home Shield final wins to know the value of the match.

Cricket Australia has prioritised the domestic Twenty20 competitions because it sees them as a cash cow and a way to break its reliance on the single revenue stream which is generated by cricket against India.

The decision to compel Bollinger and Michael Hussey to stay at the Champions League when they could have been freed up to be with the Test side exasperated many.

Hussey complained bitterly at the time. Under the contracts the pair signed with their franchises, national duties come first, but only at their board’s request.

Both players wanted to be with the Test side but Cricket Australia is a shareholder in the lucrative Champions League and wants it to feature international players.

Buford says:I agree with getting rid of some one-day matches for twenty twenty as one-dayers are as stale as a bottle of piss.