Tradition goes out the window 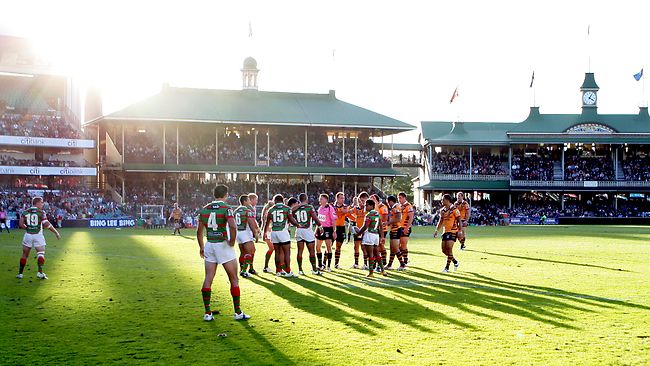 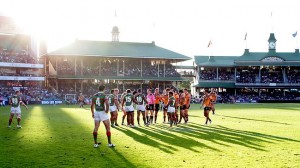 It has been one of the season highlights in recent years – old rivals South Sydney and Wests Tigers doing battle at the famous SCG.

But in a move which has shocked the Rabbitohs and will upset many fans, the Tigers have elected to play this year’s Heritage Round match next door at the Sydney Football Stadium.

Souths fans immediately accused their arch-rivals of running scared after the Rabbitohs flogged the Tigers 50-10 on the hallowed SCG turf last season.

But Wests Tigers chief executive Steve Humphreys said the lop-sided result did not impact on his club’s decision.

The Tigers will still take a match to the SCG this year – a round 22 encounter against premiers St George Illawarra.

Souths chief executive Shane Richardson said of the decision yesterday, “We definitely wanted to play the Tigers at the SCG.

“We love playing there, the ground has such a great tradition and great atmosphere.

“Souths have won there over the past two years but we got smashed the year before that. Every fan loves going there.

“Look, it is Wests Tigers’ home game but we were astonished it wasn’t at the SCG.

“I’m not sure why because playing there in the Heritage Round would have been great for rugby league.

“We were shocked when we were told but we didn’t query why.

“Playing there is a great day for everyone.

“I remember all those fans running on to the field after the game last year — it was exciting.

“Even the dressing rooms have so much history and all the cricket paraphernalia on the walls.”

Humphreys said there were sound reasons for the Tigers preferring to play the Dragons at the SCG rather than Souths.

“There are two reasons why we did it (moved the match),” Humphreys said.

‘The NRL decided to bring the Heritage Round forward from round 10 to round five.

“We didn’t agree with that.

“And we were concerned about the suitability of the SCG because it is closed to the back-end of the cricket season. NSW may still host the final.

“And, secondly, our preference was to play a round 22 match against St George Illawarra at the SCG. It is the 50-year anniversary of the 1961 grand final between Wests and St George.

“We aren’t robbing our fans of an SCG experience.

“We just wanted to celebrate the Western Suburbs side of our joint venture because the Magpies played Saints in the 1961, 1962 and 1963 grand finals.

“Tim Sheens (Wests Tigers coach) had no input into the decision.”

A crowd of 30,000 watched last year’s match between the Tigers and Rabbitohs.

The NRL had no say in where Wests Tigers wanted to play the match.

Souths players privately crave a return to the SCG while Wests Tigers players were also keen to play at the famous venue.

But Tigers officials have the final say because it’s their home game and sadly for the fans as well, the match will be moved.