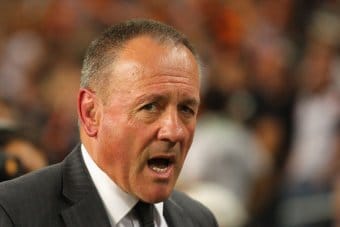 Angry Kangaroos coach Tim Sheens urged rugby league administrators not to let Test league go back to the free-swinging 1960’s in a plea for action over the mistreatment of retiring star Darren Lockyer.

A sell-out Ausgrid Stadium held its breath as Lockyer was felled in the opening minutes of Australia’s 42-6 decimation of an abysmal New Zealand.

Kiwi prop Russell Packer and his right elbow left Lockyer temporarily dazed after it contacted his right cheek as he attempted a clearing kick in the trans-Tasman Test.

Packer was put on report and will face a judiciary this week.

Lockyer, diplomat to the end in his final match on Australian soil, refused to inflame the issue by entertaining any discussion that Packer was actually focusing on his left cheek which contains several titanium plates from surgery last month.

“Sometimes when you kick the footy you get hit late and sometimes you get hit high and this was probably a bit of both. I am OK physically. I was a little bit dazed for a second. It was the other side to the previously damaged cheekbone. I don’t think he was going for that.”

But Sheens was less than impressed.

“I am glad they pulled it up because it looked pretty ordinary,” Sheens said.

“Johnathan Thurston copped a few. It was on. We dished out a bit as well. A Test match is a Test match but there is a line where a 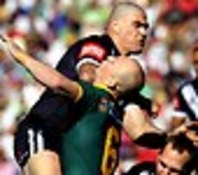 The incident only served to showcase Lockyer’s greatness for within two minutes he set up Australia’s first try with a basketball-style lob to hometown hero Akuila Uate who crossed out wide.

Man of the match Lockyer helped set up three tries in the first 13 minutes and by the time Australia snatched a 16-0 lead the game was over. Despite his recent absence through injury, there was no rust and no caution from Lockyer.

His nerve could have been tested when the Kiwi defence rushed up to try to cut off a wrap-around pass to Billy Slater in the third try but the man of silk and steel was poised to the end.

Lockyer’s popularity was such that he got a bigger cheer than cult figure Uate when the names were read out for his 56th Test and his last on Australian soil.

“Didn’t we used to jeer this bloke … is this Suncorp Stadium?” said one incredulous onlooker when the crowd broke into a “Locky, Locky” chant as he sat on the bench near the end of the game.

“Great day, perfect weather and a great crowd – I could wish not for anything more in my last Test in Australia,” said Lockyer, who will now lead Australiain the Four Nations.

“I am going to miss it, no doubt. I am privileged to do it for such a long time.”