The Green Machine ain’t retiring yet 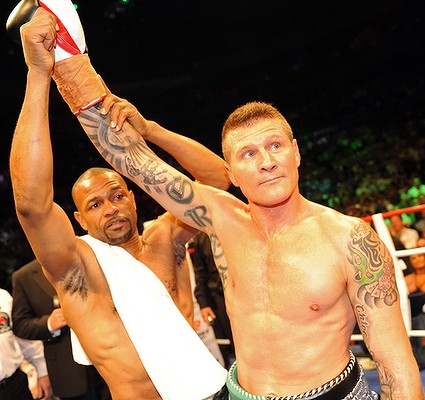 “Look, unless something radical happens, I’m back.” With that simple statement, IBO cruiserweight world champion Danny Green declared his intention to fight again, ending speculation he was about to retire.

Green considered walking away from the sport after undergoing emergency surgery in January to remove an abscess the size of a softball on his appendix – an ordeal that saw him shed 12kg.

But after making it through a tough six-round sparring session against heavyweight Pieter Cronje on Wednesday, Green was convinced his body could still handle the rigours of professional boxing.

“I feel bigger than Arnold Schwarzenegger – I’ll be back,” a relieved Green said.

“A couple of shots hurt … a couple of them stung where the scars are, so I guess in a couple of days I’ll have a better idea of how I pull up.

“I think I did fairly well for a guy who’s been very sick and hasn’t done a lot of training apart from fitness work.

“I’m physically fit but but I’m not fight fit.

“As you can see I was puffed. But I expected that.”

Green’s return comes at an exciting time for Australian boxing, with Tasmanian Daniel Geale set to face the challenge of his life when he takes on Germany’s IBF middleweight world champion Sebastian Sylvester in Neubrandenburg on May 7.

Geale, whose only loss in 25 fights occurred in a controversial split-points decision to Anthony Mundine in 2009, said he was in the best shape of his life and ready to take the world title.

“I’ve been preparing mentally for this since November last year after I beat the former champion Roman Karmazin to earn the right as the mandatory challenger,” Geale said.

While Geale makes a splash on the world stage, Green will increase his training load in a bid to fight again within four months.

The 38-year-old is yet to line up his next opponent but ruled a line through Garth Wood, who defeated Mundine in December.

“… I don’t think he would last more than one or two rounds.

“Garth doesn’t move his head so it wouldn’t be hard to catch and he doesn’t have the durability above the eyes, due to the scar tissue.

“Garth’s a strong, young guy that’s really hungry and I wish him all the best.

“But I just think at the moment we’re poles apart … I’ve been in the game for 20 years and we should be poles apart.”

Green is in the process of courting a number of European fighters but said he wouldn’t need a tune-up fight before taking on a big name.

“It’s going to make me excited to train and prepare to defeat someone great that’s going to solidify my legacy even more after Roy Jones Jr,” Green said.

Buford Balony says: How arrogant is Danny Green? Garth Wood knocked out someone you couldn’t even hit. People say Mundine is a mouth, but Danny Green is just as bad.