The Green Hoops bask in the Glory 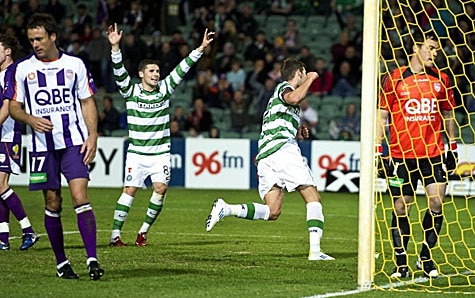 Celtic made amends for last week’s 1-0 loss to Central Coast with a convincing 2-0 triumph over a new-look Perth Glory at the NIB Stadium on Saturday night.

The Glory, featuring six new players in their starting XI, struggled to create clear-cut chances throughout the night despite the industrious work of New Zealand international Shane Smeltz, who was subbed off at halftime.

Goals to Gary Hooper and defender Charlie Mulgrew either side of the break sealed the win for Celtic, who round out their Australian pre-season tour with a match against Melbourne Victory at AAMI Park on Wednesday.

Both sides made a cautious start to the contest, with players perhaps wary of their footing on a shabby-looking pitch that required a mountain of work during the week to get rid of the excess water. 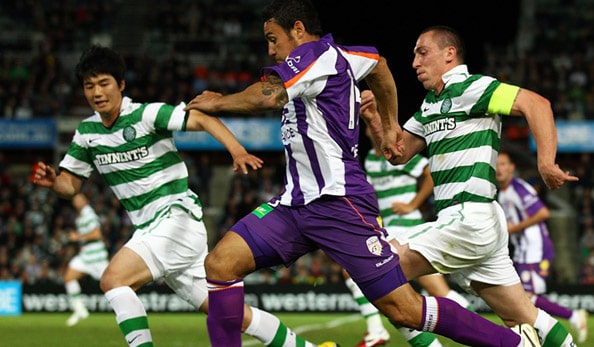 Perth skipper Jacob Burns made his presence felt throughout the contest, unleashing a series of crunching tackles in the first half to get under the skin of several Celtic players.

A reflex fingertip save by new Glory goalkeeper Danny Vukovic denied Kelvin Wilson’s smart header in the 10th minute, but a split-second of hesitation from Perth defender Bas van den Brink was all Hooper needed to open the scoring six minutes later.

But Stokes took himself out of the play, allowing Hooper to pounce on the bouncing ball before drilling it low and to the left of Glory goalkeeper Danny Vukovic.

Impressive Celtic playmaker Kris Commons almost made it a second when his free kick flicked Scott Neville’s head and drifted just wide of the target.

The Glory should have tied the game up in the 25th minute when Liam Miller’s deft chip from a close-range free kick allowed Shane Smeltz to sneak in behind Celtic’s defence.

But with just the ‘keeper to beat, Smeltz failed to connect with his left-foot volley.

Burns’ uncompromising approach started to ruffle a few feathers, but it was fellow midfielder Adam Hughes who ended up doing some physical damage, with his swinging elbow while competing for a header resulting in a bloodied nose to Celtic midfielder Beram Kayal. 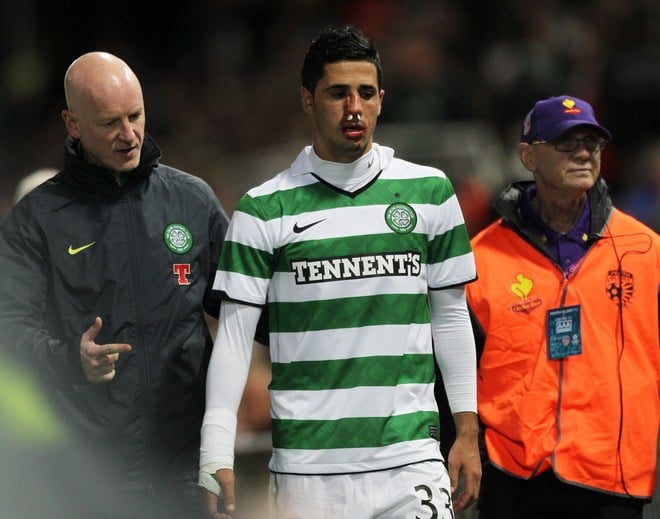 Kayal received treatment for five minutes on the field before being reluctantly substituted.

The Israeli was clearly frustrated as he came off, kicking away a sound-effects microphone after a consoling hug from manager Neil Lennon failed to calm him down.

Glory coach Ian Ferguson said he was pleased with the hit-out in front of 15,350 fans.

“We are still 12 weeks away from our season starting and Celtic are two to three weeks away from matches starting in their league, so you could see the difference in the fitness levels,” Ferguson said.

“They’re a big, physical, strong side that play well. For them to come here was a great experience for us.”

Celtic manager Neil Lennon confirmed Kayal had suffered a broken nose, but said there was no malice in the incident.

“I felt with the week’s preparation the players would be better for it and that proved to be the case.

“Hooper scored a good goal for us and we got an early goal in the second half and we were pretty much in control from then on.”