Stoner takes second victory of the season at Le Mans 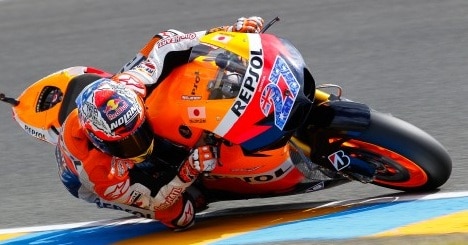 Repsol Honda’s Casey Stoner secured victory for the first time in his career at the Le Mans circuit for the Monster Energy Grand Prix de France. It was a close battle until the very end between two Italians for second place but it was the second Repsol Honda of Andrea Dovizioso who clinched the 20 points, ahead of Valentino Rossi (Ducati Team) who achieved his first rostrum riding a Ducati.

Stoner took his 25th win in his MotoGP career after a dominant ride to pull away at the front and win by a margin of over 14 seconds. With his second win of the season, the Australian has now jumped up to second place in the standings, now 12 points behind Jorge Lorenzo (Yamaha Factory Racing).

It was record-breaking attendance for the French GP with 88,400 fans attending the Le Mans circuit for today’s MotoGP race, with 176,200 for the full 3 days of action. The rain managed to stay away and an eventful race was enjoyed by the large and enthusiastic crowd. There was action throughout the field but at the end all eyes were on the dice between Dovizioso and Rossi. As in the previous race in Portugal, the Honda rider managed to deny the advances of the nine time World Champion and record his best finish of this year’s campaign. For Rossi, it was his best result of the season and the second Ducati podium of the year.

Dani Pedrosa (Repsol Honda) who had made one his trademark rocket starts, led Stoner for the first lap until his team mate came through on the next lap to take control of the race. The Spaniard stayed with the race leader for the first half of the 28 lap race, until he fell into the clutches of Simoncelli. The Italian passed the Repsol Honda rider on lap 17 but then a controversial incident occurred between the two when Pedrosa attempted to reclaim his second position and the two touched which left the Estoril race winner clutching his right shoulder as his race came to an abrupt end.

It was announced that Pedrosa was diagnosed with a broken right collarbone after the race. Race direction declared Simoncelli to have made an illegal manoeuvre and served the rider born in Cattolica with a ride through penalty. The 24 year old eventually finished in fifth position and lost his opportunity of scoring his first ever podium in MotoGP.

Jorge Lorenzo (Yamaha Factory Racing) making his 150th Grand Prix start and becoming the youngest rider ever to do so, had a bad start to his preparations on Sunday after a crash in warm up which wrecked his bike and left the Spaniard with an injury to his finger. After barging through on Dovizioso early on in the race for a top four place, the 2010 MotoGP World Champion slipped down the order after being re-passed by the Repsol Honda rider and by his fierce rivals, Simoncelli and Rossi to eventually place fourth.

Ben Spies (Yamaha Factory Racing) equalled his best result of the 2011 with sixth place which is what he achieved at the opening race at Losail, the American, lost out to Simoncelli after the Italian got the better of him despite his ride through penalty. Nicky Hayden (Ducati Team) was seventh, ahead of Hiroshi Aoyama (San Carlo Honda Gresini) who had a lonely race in eighth.

Héctor Barberá (Mapfre Aspar) won the race long battle to finish in ninth. The Spaniard had been involved in a very exciting tussle with Karel Abraham (Cardion AB Motoracing) who finished tenth, Toni Elías (LCR Honda), 11th and Álvaro Bautista (Rizla Suzuki) 12th. After the poor start to his return to MotoGP, Elías was showing signs of his old self and showing his ability which took him to the 2010 Moto2 World Championship and was up to 11th place in a five rider battle in the early part of the race, but had a massive moment and was lucky to keep hold of his Honda but dropped to the back of the group. The 28 year old did manage to pick his way through a number of the riders after a difficult four rounds of the season.

Cal Crutchlow (Monster Yamaha Tech 3) who had qualified an impressive sixth on his first visit to the Le Mans circuit, suffered a lowside when in ninth place on lap five and had to return his machine back to the pits for his first non finish in his rookie campaign. It was not a good day for Monster Yamaha Tech 3 in their home race in France after Colin Edwards also crashed out mid way through the race but managed to get back out to pick up…..points

It was not a happy day for the French fans who had hoped to see Randy de Puniet (Pramac Racing) pick up his best result of the season. The French Ducati rider crashed into the gravel on lap two and walked back to the pits dejectedly. Loris Capirossi (Pramac Racing) suffered a similar fate as he crashed out towards the end of the race.