Stoner on pole at Silverstone 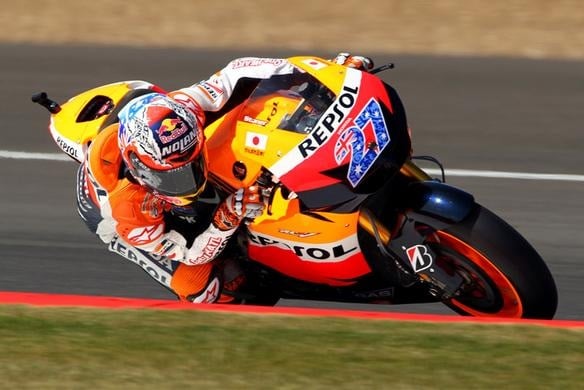 Casey Stoner fended off Marco Simoncelli and Jorge Lorenzo to claim his fourth pole position of the 2011 MotoGP season at Silverstone.

Further back, Valentino Rossi struggled to a disastrous 13th place, while there was heartbreak for the home crowd when Cal Crutchlow crashed early on and sustained a broken collarbone and concussion.

The leading three riders swapped the top spot repeatedly in a hard-fought session that saw Simoncelli under the 2010 pole time after just a quarter of an hour, Lorenzo lead the way through the middle stages, and then the two Honda riders go head to head at the end.

Stoner eventually secured pole with a 2m02.020s in the final seven minutes, and despite Simoncelli (Gresini Honda) and Lorenzo (Yamaha) throwing everything they could at their final runs, they could not depose the Australian, whose speed in the last sector in particular remained unbeatable.

Simoncelli ultimately missed out on a second consecutive pole by 0.188 seconds, and while Lorenzo was only third, he will be pleased to be within 0.217s of Stoner having been a second off the pace in practice.

Remarkably the top Ducati was rookie Karel Abraham’s Cardion AB example in sixth, as the Czech rider made the most of a tow from Lorenzo to secure by far his best MotoGP grid spot so far.

Factory rider Nicky Hayden was one place further back, while Rossi continued to struggle at Silverstone and was a massive 3.7s off the pace in 13th.

Colin Edwards gritted his teeth through discomfort from last week’s broken collarbone to take a remarkable eighth on the grid for Tech 3 Yamaha, as his team-mate Crutchlow picked up a similar injury when he fell heavily at Farm on only his third lap of the session, almost certainly ruling him out of the rest of the weekend.

Aside from Crutchlow, the session’s other accident saw Toni Elias lose the LCR Honda under braking for Vale. He was unhurt and qualified 14th.