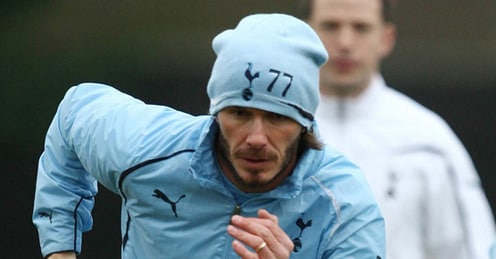 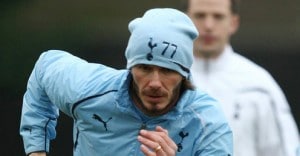 Tottenham Hotspur manager Harry Redknapp is contemplating a new bid for David Beckham even as the former England captain prepared to end his temporary stay without having played for the London club.

Redknapp hasn’t ruled out making a move for Beckham when the midfielder’s current deal with the Los Angeles Galaxy expires in November, even though the dead-ball expert will then be aged 36.

Beckham has been training with Spurs ahead of the new Major League Soccer season in the United States and is due to return to Los Angeles on Wednesday.

Redknapp tried but failed to seal a loan move for the midfielder and had to be content in seeing Beckham train with his squad.

“I would like to have had him playing as he has looked great in training.

“He is so slim and so fit, he is a fanatical trainer. He works in the morning and the afternoon in the gym. He just loves playing football.

“He could be at home now sitting around the pool. I am sure he has a decent enough semi in Los Angeles but he is over here wanting to play football. Most footballers would want to be in Los Angeles.

“But that is what has made him what he is. He wants to keep playing and he is a mega rich man. He just loves the game.”

Tottenham remained in contention for a top-four spot and a place in next season’s Champions League after a 1-0 win away to Blackburn Rovers on Wednesday.

Peter Crouch headed in the only goal of the game from a Rafael van der Vaart cross and Redknapp said it was the kind of ball Beckham could supply as a matter of course.

Asked if he might make a fresh bid for the former Manchester United favourite, Redknapp replied, “I could do, yeah. I love him, I love the way he plays. That ball that van der Vaart hit for Crouchy, David hit about seven of them the other morning in training.

“It was like he had radar and Crouchy kept heading them in the goal. I kept saying ‘That’s what I have been asking you to do, lads’.

“David has been fantastic. He is a top-class bloke. He has been great around the place. You would love to have him at your club.”