Shane Smeltz the Heart out of Melbourne 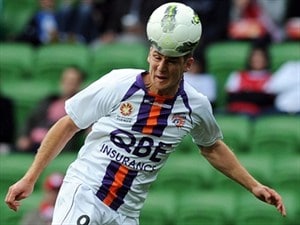 A double from Shane Smeltz has given Perth Glory a perfect start to the A-League season with a 2-1 victory over Melbourne Heart.

The win leaves the Glory and league leaders Brisbane Roar as the only teams with wins in their opening two matches of the season.

But the Heart sit bottom of the league – the only team without a point after a rudderless display in a benign match of few highlights.

Two defensive errors gifted Smeltz his goals, though both were beautifully taken by the New Zealand striker.

Smeltz’s first goal for his new club was in trademark fashion – a quality header off a pinpoint Liam Miller cross on 33 minutes.

But good as Miller’s cross was, Smeltz was afforded way too much space between centre-half Matt Thompson and goalkeeper Nikola Roganovic to make his finish stick.

“It wasn’t a great game, chances were few and far between, but Smeltz can make that difference. He had two chances today, scored the two of them,” Glory coach Ian Ferguson said.

“It’s great for the Glory to get two wins out of two.”

Against the run of play, the Heart equalised in first-half stoppage time when referee Gerard Parsons spotted Glory defender Chris Coyne’s shirt tug on striker Maycon and awarded a penalty.

A meandering second half full of sprayed shots and passes was shaken to life by Smeltz after Thompson kept in a sideline-bound ball when there was no need.

Smeltz couldn’t believe his luck, pounced on the loose ball, stood up defender Curtis Good and let fly for a fine 67th-minute winner.

The Heart’s loss will add further importance to their derby on Saturday night against Melbourne Victory.

The Victory have just one point from their two matches this season – losing 1-0 to Adelaide United on Friday.

Heart coach John van’t Schip’s honest appraisal was that he and his players should be concerned by the mistakes being made, and their lack of invention againstPerthin a performance he labelled “poor”.

“Playing with fear – that’s what I certainly saw in the first half,” van ‘t Schip said.

“There was a kind of a fear in the team, not expressing themselves and feeling free to play.

“We all know that when you have fear, you can’t perform.”