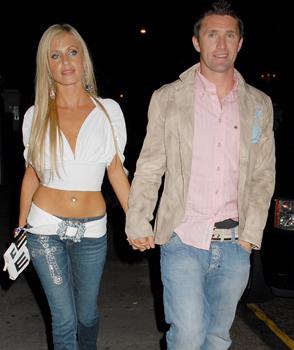 When David Beckham and wife Victoria landed in Los Angeles in 2007 to begin David’s contract with the LA Galaxy their arrival was met with much fanfare.

The Irish striker is joining Beckham with MLS club from Tottenham on a two-year contract, and judging by their faces after they landed the couple are ecstatic about their Hollywood move.

Keane, 31, waved to assembled photographers and fans as he emerged from the terminal with a grinning Claudine by his side.

The WAG, 27, ensured she was camera-ready with perfectly done make-up and hair and glamorous clothing which hardly lent itself to comfortable travel.

The couple happily posed for photographers, with Robbie leaning in to kiss his wife’s cheek at one point.

Keane has said it was a ‘dream come true’ to join the MLS and revealed that David Beckham had played a role in the move after speaking to him about Galaxy when the former England captain trained with Spurs in January.

‘When David Beckham came and trained at Spurs recently he couldn’t speak highly enough about the Galaxy, their fans and the league in general, so I can’t wait to get over and get started,’ he said.

‘I am delighted, honoured and very excited to be joining the LA Galaxy.’

Galaxy boss Bruce Arena said, ‘Robbie Keane will be a great addition to our club. I have followed his career and have always respected his ability as a competitor and a goalscorer.

‘I believe that he brings qualities in and around the penalty area that we have been lacking.

Hopefully, he will be another piece of the puzzle in our quest for the Supporters’ Shield and an MLS Cup championship as well as to advance to the next round of the Champions League.’