Ricky Stuart and Phil Gould are back together 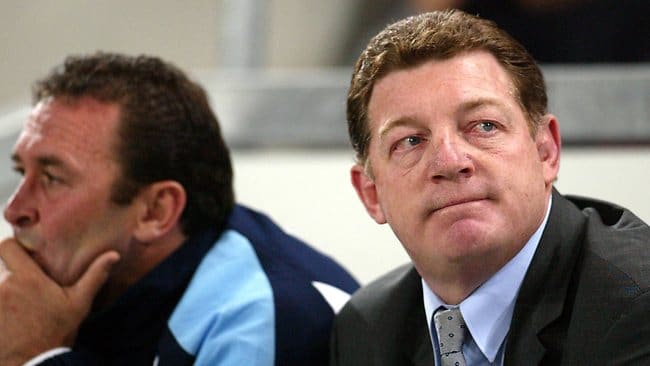 The old firm of Ricky Stuart and Phil Gould is back together in a bid to break NSW’s six-year Origin-losing streak and strike a serious blow on behalf of rugby league in its battle with the AFL for the hearts and minds of western Sydney.

Stuart has agreed to an approach from Gould to base the Blues in Penrith for the start of their Origin campaign ahead of game one in Melbourne on May 23.

It’s a long way from the swanky digs the Blues had grown accustomed to in posh Coogee in recent years.

Instead, they will be based in the game’s heartland at Penrith…a move many will see as serious in the game’s streetfight with the AFL.

With the team entrenched in Penrith, Gould…the Panthers general manager…will address the NSW team for the first time in years.

“When Gus spoke to me about the opportunity to start our preparations in Penrith, I saw it as a great chance to promote rugby league in the heartland and create the theme we need for Origin I,” Stuart said.

“My job is to win Origin for NSW. The facilities in Penrith are first class, and the passion of the people in the west will ensure that the boys are switched on from the minute they are in camp.”

It is clear Stuart will take an even tougher mindset into this campaign than last year, when his side took the series to the decider at Suncorp Stadium. Losing seven straight series seems completely unacceptable.

The return of Gould, the most successful coach in Origin history who preceded Stuart as Blues coach in 2004, is already being considered a major windfall.

In the past, he has been reluctant to be involved with NSW teams when he hasn’t been coaching.

“I talk to Gus a lot about football and Origin,” Stuart said.

“And there’s no better person to speak about Origin than him.”

The decision to base the Blues side at the foot of the Blue Mountains is equally telling.

Since his appointment as Penrith’s general manager, Gould has been highly critical of the NRL and ARL administrations for failing to stop the push from the AFL into Sydney’s western districts.

That battle is set to intensify this year when the Greater Western Sydney franchise plays its first season under Kevin Sheedy.

“This is a wonderful gesture by Ricky Stuart and his team, as they realise the importance of promoting our game in the real heartland of rugby league,” Gould said.

“Ricky Stuart and the Blues will be given full access to our training fields and amenities – not to mention our wonderful club.

“The Blues will be conducting a coaching clinic for kids on the Monday afternoon, and on Tuesday afternoon there will be a huge fan day for anyone in western Sydney and the Blue Mountains who want to come and meet their Origin heroes.”