Osieck will use A-League players for qualifier 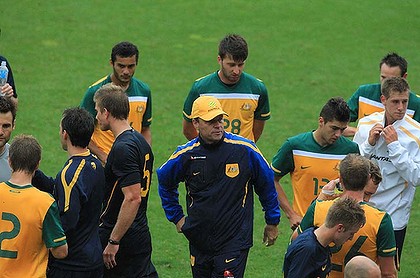 Despite suggesting late last year during a press conference to announce AAMI Park as the venue for the game that he would play his best side, it is understood the logistics, player doubts about making the long trip for one game and the fact he will have little time to prepare the team will all conspire against his best plans.

Osieck can afford to take some liberties given Australia is already through to the next phase of the Asian qualifiers, topping the group with 12 points…six ahead of nearest rival Saudi Arabia, and with just one match left.

But he certainly wasn’t contemplating that scenario in November when he said: “I definitely won’t approach this game as an experiment. We are in the process of getting the group together and there won’t be too many changes.

“I’m pretty happy that I can count on experienced and well-tested players and they will definitely be the core group of our team for the games.”

As much as the likes of Tim Cahill, Mark Schwarzer, Rhys Williams, Brett Holman, Mile Jedinak and Carl Valeri cherish putting on the green and gold, Osieck was always going to have a tough job getting them back toAustraliafor a meaningless game in terms of qualification.

Given their weekend club commitments, it would also make no sense to force these players to travel and then play, when most would arrive only on the Monday or Tuesday before the Wednesday match, leaving virtually no time to prepare.

With the Socceroos already without Matt McKay and Luke Wilkshire, who are suspended, the situation will open the door for the A-League players to impress Osieck before the final phase of qualifiers for the 2014 World Cup finals inBrazil.

There have been some impressive performers in the local competition this season, including Matt Ryan, Rostyn Griffiths and Josh Rose (Central Coast Mariners) and Aziz Behich (Melbourne Heart).

The likes of Harry Kewell and Archie Thompson (Melbourne Victory), Brett Emerton (Sydney FC) and Mitch Nichols (Brisbane Roar) would be regarded as certainties to be picked, while Perth Glory duo Jacob Burns and Mile Sterjovksi have been in good form and would not be out of place.