On this day in 1994, George Foreman, age 45, becomes boxing’s oldest heavyweight champion when he defeats 26-year-old Michael Moorer in the 10th round of their WBA fight in Las Vegas.

More than 12,000 spectators at the MGM Grand Hotel watched Foreman dethrone Moorer, who went into the fight with a 35-0 record. Foreman dedicated his upset win to “all my buddies in the nursing home and all the guys in jail.”

Born in 1949 in Marshal, Texas, Foreman had a troubled childhood and dropped out of high school. Eventually, he joined President Lyndon Johnson’s Jobs Corps work program and discovered a talent for boxing. “Big George,” as he was nicknamed, took home a gold medal for the U.S. at the 1968 Olympics in Mexico City. In 1973 in Kingston, Jamaica, after winning his first 37 professional matches, 34 by knockout, Foreman KO’d “Smokin'” Joe Frazier after two rounds and was crowned heavyweight champ.

At 1974’s “Rumble in the Jungle” in Kinshasha, Zaire, the younger, stronger Foreman suffered a surprising loss to underdog Muhammad Ali and was forced to relinquish his championship title. Three years later, Big George morphed from pugilist into preacher, when he had a religious experience in his dressing room after losing a fight.

He retired from boxing, became an ordained minister in Houston and founded a youth center.

A decade later, the millions he’d made as a boxer gone, Foreman returned to the ring at age 38 and staged a successful comeback. When he won his second heavyweight title in his 1994 fight against Moorer, becoming the WBA and IBF champ, Foreman was wearing the same red trunks he’d had on the night he lost to Ali.

Foreman didn’t hang onto the heavyweight mantle for long.

In March 1995, he was stripped of his WBA title after refusing to fight No. 1 contender Tony Tucker, and he gave up his IBF title in June 1995 rather than fight a rematch with Axel Schulz, whom he’d narrowly beat in a controversial judges’ decision in April of that same year.

Foreman’s last fight was in 1997…he lost to Shannon Biggs. He retired with a lifetime record of 76-5. 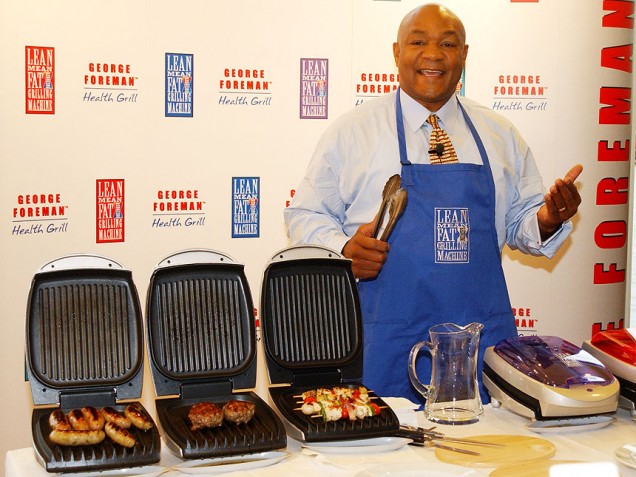 Outside of the boxing ring, Foreman, who has five sons, all named George, and five daughters, has become enormously wealthy as an entrepreneur and genial TV pitchman for a variety of products, including the hugely popular George Foreman Grill.