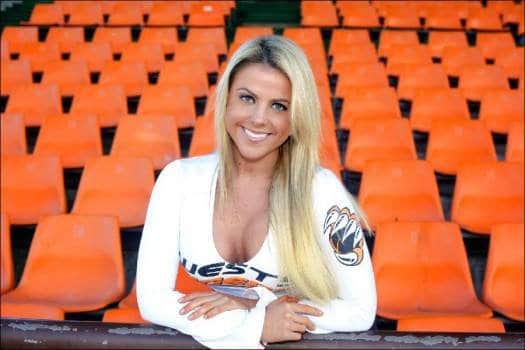 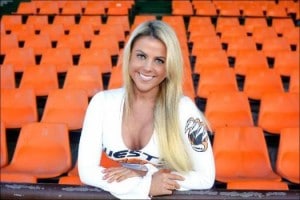 Wests Tigers cheerleader Kymberley Roebuck has been crowned the Big League Cheerleader of the Year for 2010.

Kymberley is naturally beautiful and puts a smile on every Wests Tigers supporter.

She was up against the best cheerleaders in the NRL and won by popular vote.

Kymberley is such a warm and genuine person. She’d already decided that she was going to donate her winnings to Lleyton Giles, the five-year-old boy who is battling a terminal liver condition. 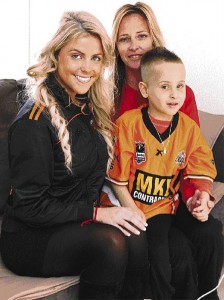 Campbelltown Sports Stadium a few weeks back after the team met and were inspired by Lleyton at a training session.

Wests Tigers arranged for Lleyton to lead the team out onto the field with captain Robbie Farah before he placed the ball down for kick-off with Benji Marshall.

Following the game, Marshall lifted Lleyton above his shoulders as they thanked supporters before the players formed a guard of honour for Lleyton to run through.

Acouple of days later, the Giles family had a visit from Kymberley, and she then informed them that she’s decided to donate any prizes to Lleyton if she won any.

Kymberley will now donate her first prize of a $2000 voucher from GoDo.com.au. 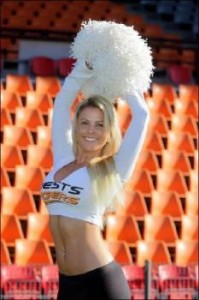 As part of her prize, Kymberley graces the cover of this week’s Big League magazine which features a two page article entitled ‘Heart of Gold’ telling of her decision to help Lleyton.

“I told people before the final that they were not voting for me but for Lleyton,’’ Kymberley said.

“Like many people, I was so touched by what Wests Tigers did for Lleyton at Campbelltown. It was only when I was driving home after the game that I decided that should I win the competition, then I would donate the prize to Lleyton.

“It hit me hard. What I learnt from meeting with Lleyton is that life is too short and you can’t take anything for granted. He is such a beautiful boy.

“I just like to thank all of the Wests Tigers supporters who voted for me. Wests Tigers is the best club in the NRL to cheer for.

“It is nice to win the competition but I’m just glad that I have been able to help Lleyton.”

People may have voted for Leyton, but they were also voting for your big heart…oh yeah…you’re not so bad at cheerleading as well.

Buford Balony says: Not only are we the best team, we have the hottest and best cheerleaders. YeeeeeeeeeHaaaaaaaaa!