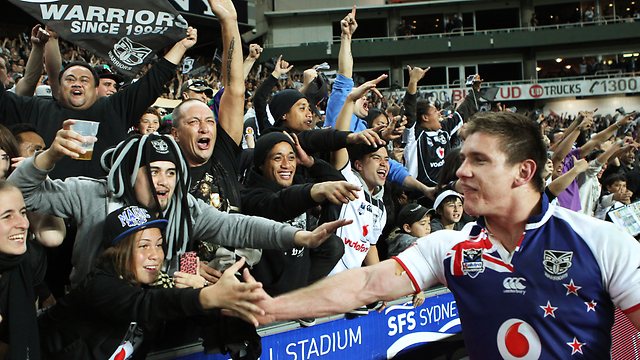 While today’s NRL grand final pits together clubs from two fierce rival sporting nations, it appears patriotism will be pushed aside in favour of an alternate breed of allegience – the one they call ‘Anyone But Manly’.

We all suspected it. This week, Foxtel asked fans to tell them who they would be supporting this afternoon.

At the time of writing, 60 per cent of you say you’ll be lending your hearts to the Warriors.

Some put it down to siding with the underdog in the hope of seeing a fairytale first premiership for the New Zealand-based club, others say they’ve been taken by the attractive brand of footy adopted by Ivan Cleary’s boys.

But at the heart of the love of the Warriors is the underlying distaste for Manly success. They’re the team NRL fans simply love to hate.

“Seeing Manly lose on Sunday would be better than seeing the Warriors win,” Manly Sea Urchins.

Such is the passion of the neutral mob’s disliking of the Silvertails, that a facebook group called “Cheering for the Warriors for Grand Final week because you hate Manly” has attracted more than 15,000 fans inside four days.

“I’m a Storm supporter and shattered that the Warriors beat them last week but can put that aside for the weekend. Would love to see them crush Manly,” one fan wrote.

Bill of North Ryde wrote: “As a Wests Tigers supporter and Australian, I am after just one good reason to support Manly. I am still searching … Go the Warriors!”

Henry the Ninth took a more measured approach to justifying his newfound allegience, writing, “I have no love for the Warriors or Kiwis in general, but I will be supporting them in the GF.

“Mainly because I despise Manly, yes, but also because the Warriors winning would be good for the game, not only in NZ but here, whereas Manly winning will do no good for anyone except Manly themselves.

“The Warriors are an extremely entertaining side to watch, and the game can only benefit in terms of audience appeal if other teams are inspired to play the same way.”

On the other side of the ledger, some fans maintain that country ties trump existing club relations.

Many will become Manly fans for the first time in their lives through a desire to see the Telstra Premiership trophy remain on Australian soil.

“A reminder that Australians were abused, spat on and told to go home when they were at the Rugby World Cup in Auckland. Just for wearing our countries jersey,” Australian in Brisbane commented.

“They hate our guts, so my vote is for an Australian side over an NZ side anyday.”

But regardless of whether the majority are cheering or jeering the Sea Eagles come Sunday afternoon, you’d be naive to think for one second that the maroon and white faithful are perturbed by the grudge.

It was an “us versus them” mentality instilled by Ken Arthurson in the 1980s and Manly are more than happy to maintain that tradition.

Maroon and white blood of Manlyville writes, “On Friday night I got off the train at Newtown station with my Manly jersey on… as the train pulled away the guard said to me, ‘Gee I hate Manly. Can’t believe they won’.

“My reply was simple and to the point – ‘Manly hates you too’.

“That’s the mindset I’ll be in come Sunday and I wouldn’t have it any other way.”