Mitchell has to be dropped…says the chosen one 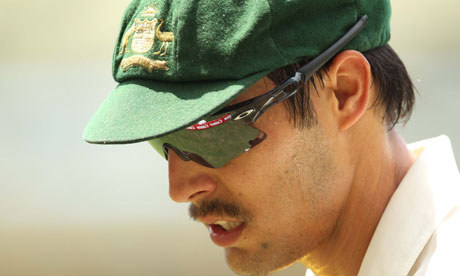 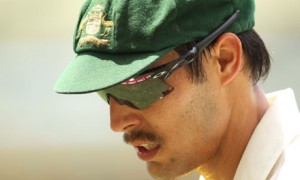 Mitchell Johnson has come under continued fire ahead of the second Ashes Test in Adelaide, due to begin on Friday, after his underwhelming performance in the drawn first Test at the Gabba.

Australia’s selectors called up fast bowlers Doug Bollinger and Ryan Harris for the Adelaide Test, after the Gabba draw, an announcement that may spell trouble for Johnson.

Cricket commentator Mark Waugh is among the pundits concerned by the efforts of Australia’s bowling outfit in Brisbane, and he welcomes the inclusions to the squad.

“As far as the fast bowling is concerned, obviously you’ve got to look at Bollinger, and Harris if he’s fit – they’re both very good bowlers,” Waugh told The Last Word after the Gabba draw.

Johnson, at the Gabba, went wicketless for the first time in his 39 Tests, his efforts unrecognisable compared with those of the destructive bowler he had been in the past.

“The problem with Mitchell Johnson is he’s too one-dimensional, and I think the opposition have worked him out,” Waugh said.

“I think he’s down on confidence.”

Herald Sun reporter Jon Anderson believes Johnson, when in-form, is a prized jewel in Australia’s attack. But Anderson is unconvinced about Johnson’s worth in the Ashes squad.

“Johnson at best, is the best bowler in the Ashes series,” Anderson said on The Last Word.

“But he’s a long way from that.

“I don’t think as a bowler he’s going to stand up (to the challenge) … for me, he just isn’t moving the ball well enough.”

Australia selector and former captain Greg Chappell, meanwhile, echoed the concerns of Waugh and Anderson, citing a lack of confidence as the cause of Johnson’s downfall.

“You could just see his confidence ebbing away to the point where there were some wides and horrible deliveries, and he just looked like a guy bowling without confidence,” Chappell said of Johnson’s efforts at the Gabba.

“So I’m not sure you can take him into Adelaide with no confidence, that’s one change they’ve got to make.”

But Waugh was unsure when asked whether Australia’s selectors would change the team for Adelaide, despite the disappointing outcome of the first Test in Brisbane.

“I don’t think they’ll make many changes, given that it was a draw – we didn’t lose the game,” Waugh said on The Last Word.

“There’s a bit of a question mark on him, but I think the selectors will probably leave it the same given it was a draw in the first Test.

“He’s got to do something special or otherwise he’s in grave danger of losing his spot for the third Test.”

Buford Balony says: Get rid of him, he was crap against England & has been crap ever since his girlfriend & mum were fighting over him. He has been shown to be mentally weak since then & isn’t going to get over it. Doug Bollinger is not going to let a little thing like that turn him into a sook.