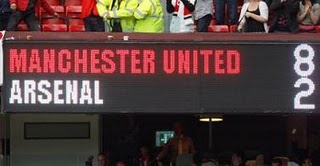 Arsenal conceded eight goals for the first time since 1896 as Manchester United, inspired by a Wayne Rooney hat-trick, romped to an incredible 8-2 victory over the 10-man Gunners at Old Trafford.

As well as Rooney’s treble, Ashley Young helped himself to two goals, with further strikes coming from Nani and substitute Park Ji Sung after Danny Welbeck had scored the opening goal.

United’s stunning display lifted the champions to the top of the Barclays Premier League with a 100 percent record from three matches, just hours after rivals Manchester City had issued their own statement of intent with a 5-1 win at Tottenham.

The embarrassing defeat illustrated the work required in the transfer market by Arsenal manager Arsene Wenger, whose position could be questioned after this demolition.

In an afternoon to forget for a makeshift Arsenal side, who saw Carl Jenkinson receive a late red card, Wenger endured one of his most humiliating results of his long tenure with the Gunners.

Wenger’s side have yet to win in the Premier League this season and this setback will send shockwaves through their camp.

“You feel humiliated when you concede eight goals,” Wenger said. “It was a terrible day for us.

“It was a combination of an under-strength team and weakness. We collapsed physically in the second half.”

United boss Alex Ferguson added, “It is a surprise because when you play Arsenal you expect a difficult game. If you look at Arsenal the team is weakened but we still did the job.”

Wenger named a weakened side, with young French midfielder Francis Coquelin handed a baptism of fire on his Premier League debut, while Ferguson kept faith with his own youngsters and two of them threatened to hand the hosts the lead inside the opening six minutes.

Tom Cleverley was narrowly wide of the target with barely two minutes on the clock. Welbeck came even closer four minutes later as he beat the offside trap from Ashley Young’s pass but failed to trouble Arsenal goalkeeper Wojciech Szczesny.

That was soon to change as Welbeck opened the scoring in the 22nd minute.

Anderson’s cleverly weighted pass exposed the Arsenal defence as Welbeck shrugged off the attentions of Johan Djourou before looping a header home.

Arsenal missed a glorious chance to respond five minutes later when Jonny Evans pulled down Theo Walcott for a penalty, but Robin 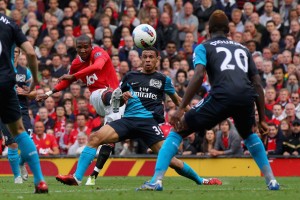 To add insult to injury, within 60 seconds Young had extended United’s lead. as the winger struck from 25 yards.

The only blot on the copybook for Ferguson was a hamstring injury sustained by Welbeck, which will surely end his chances of featuring in England’s forthcoming Euro 2012 qualifiers.

But even that couldn’t halt the home side as Rooney’s 41st minute free-kick piled on the misery for Wenger.

Arsenal were given a glimmer of hope on the stroke of half-time when Tomas Rosicky’s pass freed England winger Walcott and he fired through De Gea’s legs as the Gunners scored for the first time in the league this season.

However, the visitors conceded three goals in a seven minute burst to end the match as contest.

Despite van Persie’s goal two minutes later, there was worse to come for the shell-shocked visitors.

But Manchester United weren’t done there as Rooney completed his treble from the penalty spot after Patrice Evra was fouled by Walcott, before Young again found the target in injury-time to add to the visitors’ torment.