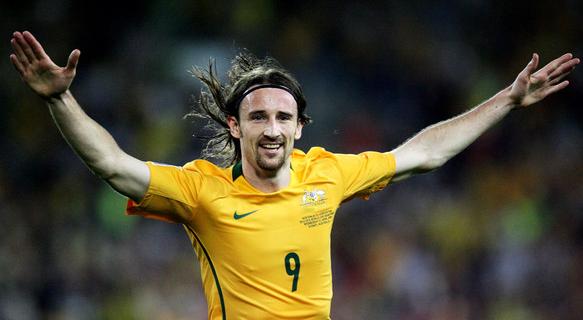 Josh Kennedy has finally declared himself fit and firing for Australia’s World Cup qualifier against Oman.

Premier forward Kennedy had doubts about his readiness for the Socceroos clash with Oman in Muscat tomorrow and a June 12 date with Japan in Brisbane after pulling up sore from Nagoya’s 1-0 domestic loss to Cerezo Osaka last Friday. 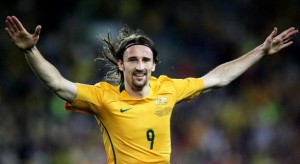 However, surviving the distance in the 1-0 round of 16 ACL loss to Adelaide at Hindmarsh on Tuesday put 194cm marksman Kennedy’s mind to rest after an ongoing battle with a back ailment.

“I pulled up all right, better than last game which is a good sign. The schedule was a bit too much to play the Denmark friendly on Saturday so I will have a couple of games in Oz then off the Oman,” said Kennedy.

“I am glad I don’t have too much time to think about that game (and) go straight into the Socceroos,” Kennedy said.

“That will be a good change.”

“Adelaide managed to squeeze one in against us and that was it. They have beaten everyone home and away and there is no reason if they play as team they can’t go all the way,” said Kennedy, who has 44 goals in 80 J-League games.

Kennedy said the hectic Socceroos schedule was a “big challenge” not just for himself but for all his team-mates as they target Brazil 2014.

“I am looking forward to it. It will definitely be a big test. We have to back up a few days later in Brisbane against Japan, so the schedule is tough, but we have to do it,” he said.

Australia is seeded top in group B, which also includes Japan, Jordan and  Iraq.

Kennedy will offer his inside J-League knowledge to Holger Osieck but said the Socceroos manager was suitably up to speed.

“Holger is in Japan himself and knows the style the boys play so he will be well informed. If he needs a few little extra hints then I will be happy to give it to him,” said Kennedy, now Australia’s key attacking option with Tim Cahill and Harry Kewell in the twilight of their international careers.