Katich thinks Warner is a leader 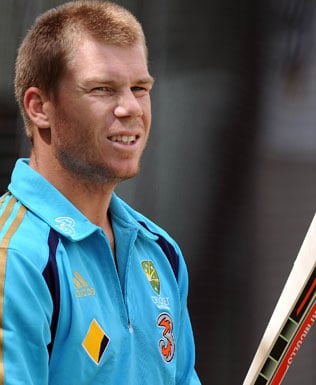 Simon Katich has joined the growing chorus extolling David Warner’s leadership virtues, which will be on display again when the batting dynamo fills the role of Australia’s de facto Twenty20 captain.

Warner was at ANZ Stadium to promote the Twenty20 international against India on February 1, the first cricket international at the former Olympic stadium.

He remains a chance to captain Australiain that game and will be the major draw card, enhancing the possibility that the record crowd of 58,446 fans attending a day’s cricket in Sydney, set agains tEngland in 1928, could be smashed.

Warner is confident in his ability as a leader despite limited experience.

“I’ve been lucky enough to captain the Thunder this year and the Chairman’s XI game in Canberra,” Warner said.

“It was a great thrill for me and I really enjoyed it.

“I have a pretty good idea about the game and what goes on and I can sum up a situation.

“I think I could be a captain and a leader one day, and now I’m starting to realise that.

“My first step was asking if I could be captain of my first-grade side (Easts), and they let me do that.

“It’s exciting for myself to have some sort of control while I’m out there with the fielding placements and ideas.

“I think I’ve got potential to do it.”

White’s logical replacement, vice-captain Shane Watson, is yet to prove his fitness after suffering hamstring and then calf strains that have cost him the entire Test summer.

Watson was expected to play for Sydney Sixers this weekend, but he did not train with them as anticipated on Tuesday.

The Sixers may need to make the Big Bash League final in 10 days for Watson to have a match before the first T20 international four days later.

“There’s no doubt he can be captain, the Thunder made him captain, and he led by example, got out there and made 100,” Katich said of Warner.

“He’s brilliant in the field, played a lot of cricket in the Twenty20 form, and as he plays more first-class and Test cricket, there’s no doubt that experience will hold him in good stead.”

Katich said that instinct was the one ingredient needed to be a successful skipper.

“And Dave is a player who backs himself and trusts his instincts,” Katich said.