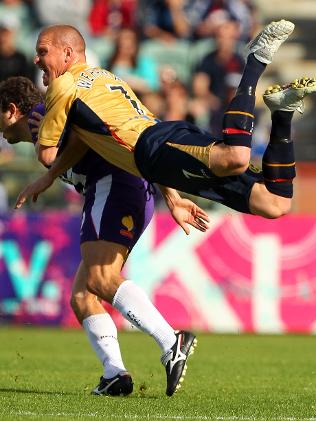 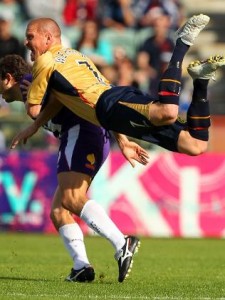 An early first half volley from captain Michael Bridges and a late goal to substitute Labinot Haliti saw the Jets home in a dominant performance to register their first win of the season, albeit in front of a disappointing crowd of 6977.

It was a timely win for Branko Culina’s side, with the Jets’ future still in doubt in the wake of owner Con Constantine’s financial woes.

With the club’s fate likely to become clearer early next week, the players at least made good on their promise to stay focused in the face of adversity with a spirited performance.

In the end the margin could have been greater had they not been denied twice by the woodwork and Glory goalkeeper Tando Velaphi.

In a fine all-round performance, former Leeds striker Bridges got the Jets off the mark in spectacular fashion, hammering a sweetly-struck volley into the top left corner from a tight angle.

Glory failed to deal with one of Kasey Wehrman’s dangerous corner kicks and, after Jeremy Brockie couldn’t get the ball under control, Bridges was on hand with a first-time finish.

Not content to protect their lead, the Jets keep their foot on the gas and were unlucky not to be rewarded before half-time.

Only the left upright prevented a Glory own goal in the 13th minute after it failed to deal with another set piece before Nikolai Topor-Stanley and Ruben Zadkovich were both denied by diving saves from Velaphi.

Glory’s best chances in the first half fell to Robbie Fowler but the former Liverpool striker found himself isolated for the most part.

Despite losing Tarek Elrich to a thigh injury, the Jets’ attacking raids continued in the second half, with Zadkovich firing into the crossbar in the 51st minute.

Glory midfielder Steven McGarry threatened Newcastle’s goal twice in the second half but the visitor never really looked like preventing a second-straight loss.

Haliti looked lively after coming on and was rewarded in the 89th minute when he broke on goal and finished cooly past Velaphi to seal the three points.

Prior to the match, A-League chief executive Lyall Gorman said he was confident a resolution to the club’s issues was imminent and that Newcastle’s match against Gold Coast at Skilled Park on Wednesday would go ahead as normal.

Football Federation Australia is due to meet with Constantine again on Monday.

The Jets’ players relief was clear to see after the win as they embarked on a lap of honour to thank the fans in attendance.

A proud Culina heaped praise on his charges.

“I’m so pleased for the players, until you’ve been in a situation that the players have been under … you don’t realise what an effort it was over the last few weeks,” Culina said.

“I felt we haven’t been far away from getting a good result and to the players, thank you, but you deserve all the plaudits.”

Glory coach Dave Mitchell conceded his side may have simply come up against Newcastle at the wrong time.

“They had their backs to the wall and they were very hungry,” he said.