James O’connor is the way forward for Wallabies 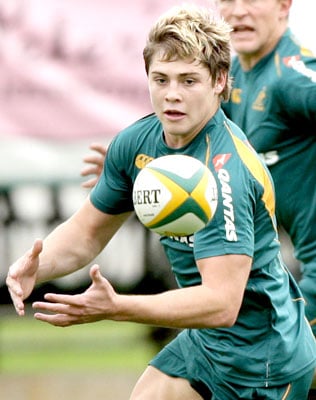 Wallabies  James O’Connor has to be first choice midfield playmaker for Australia.

Apart from David Pocock, O’Connor was Australia’s standout performer at the Rugby World Cup, the 21-year-old coming of age with a series of match-winning performances in New Zealand.

The Wallabies’ youngest player turned the game after coming off the bench against Italy, kicked nine from 10 in the wet against Russia, crowned an awesome display in the quarter-final with the winning penalty goal against South Africa and booted Australia to victory over Wales in the bronze medal playoff.

He also produced the chase of the tournament to bring down runaway winger Tommy Bowe at the death in Australia’s shock loss to Ireland, a gallant effort that sidelined O’Connor from the USA game with a hamstring strain.

With Quade Cooper now facing at least six months rehabilitation from his knee injury and Berrick Barnes the only obvious five-eighth contender, O’Connor is eager for a senior midfield position on the Wallabies’ upcoming tour of the UK.

“I’m happy to play on the wing, bide my time, but I’ll be putting my hand up now, depending on how Quadey’s going.

“Hopefully he’ll have a speedy recovery because he’s not just a good mate of mine, but a massive asset to our team.

“But if the circumstances are such that he misses the spring tour, then I’ll definitely be putting my hand up.”

The Wallabies on Sunday confirmed that 23-year-old Cooper will next week undergo an MRI scan before having surgery to reconstruct the anterior cruciate ligament in his right knee, while also repairing his lateral ligament.

With 92-Test discard Matt Giteau almost certainly out of the frame, especially after tweeting that Ewen McKenzie should be the Wallabies coach after Australia’s semi-final exit from the World Cup, O’Connor even looms as a flyhalf option.

“There’s a couple of guys who can slot in. I’ve spent a bit of time at 10 and so has Kurtley,” O’Connor said.

“So you’ve got Barnesy, Kurtley and myself who can all play 10 and we’ve got a lot of centres, which is probably a big asset to us.

“We’ve also got guys on the fringes as well who can slot in the wing and fullback positions, so we do have a lot of depth in the backline.”

But if Beale is also ruled out of the spring tour with his hamstring injury, O’Connor will almost certainly be used as back-up five-eighth to Barnes, Australia’s standout man of the match in Friday night’s 21-18 win over Wales.

With Cooper and Beale both forced off inside 22 minutes, Barnes called the shots with aplomb, with young veteran O’Connor providing great support in his 36th Test since debuting on the 2008 spring tour.

Buford Balony says: Wasted on the wing when you have 2 lemons like McCabe and Faiinga playing in a World cup semi.