James Magnussen can lift the Dolphins

Magnussen has further asserted himself as the genuine star of the Dolphins squad at London Olympic trials in Adelaide, as he claimed the 100m and 50m freestyle double and put the world on notice with his times.

The 20-year-old clocked 47.10 seconds in the 100m to lower his own mark of the fastest-ever swim in a textile suit, falling just 0.19 short of Cesar Cielo’s super suit world record from 2009 that some said could take decades to be broken. 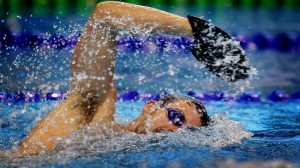 Almost as daunting for rivals was his performance in the 50m, an event he described as just “a bit of fun” before clocking 21.74 in the final, a time that would have won him silver at last year’s world championships.

Magnussen now heads to London with some chance at becoming the first Australian to win four gold medals at an Olympics, with Australia’s men also title contenders in the freestyle and medley relays.

“That 50, he couldn’t swim a 50 last year, and the next minute he’s posted the second fastest time in the world.

“There is a medal there that we never even dreamt of.

Australia’s squad for London, finalised on after Thursday night, will feature a host of much-improved male youngsters and Nugent said Magnussen’s impact had been immeasurable.

Not since Thorpe and Hackett dominated the Dolphins’ performance at the Sydney 2000 and Athens 2004 Olympics has the Australian team had a brighter leading light.

“James is a different sort of character but he’s certainly having that impact,” Nugent said.

“He’s a popular guy, he’s well liked, and I think people are looking to his spirit in the team.

“Ian and Grant and Michael Klim had that type of spirit too.”

Magnussen’s straight-talking confidence has endeared him to many, though it has also opened him up to criticism from some in social media circles who say he lacks humility.

But the Port Macquarie swimmer says he’s simply backing his own ability.

“I’m certainly not cocky or arrogant about what I do,” Magnussen said before the trials.

“I try and stay as grounded as I can outside of the pool but in saying that is also vital in an event like the 100m freestyle to be confident so it’s really about finding a balance I think.

“I think if you can be confident and have a good relationship with the media and the spectators, that’s a good thing.”

Although Nugent says performances at the Olympic trials in Adelaide surpassed his expectations, he admits it will be hard for Australia to maintain its billing as the sport’s No.2 nation in London.

Australia has been second ranked behind the United States at the last three Games on the medal tally, winning six gold medals in Beijing 2008, seven in Athens 2004 and five in Sydney 2000.

But Nugent said it would be hard to hold that spot in London.

“The gap’s closed on us by the nations that have finished third and down,” Nugent said.

“The US are the big challenge obviously. They’ve dominated swimming for 100 years and we’ve tried for 100 years to try and get on top of them and we’ll keep attempting to do that.

“But there are other players that have come into the game now that are making it tougher for us to stay in that number two position, the big country is China and the other France.

“We’ll just be doing what we can do and the results will look after themselves.

“We have no control over what the other competing nations will do, if we can put it together properly we’re going to get a pretty good result.”

Nugent has always been reluctant to predict medals but said it was realistic to think Australia could secure around 15 medals overall as it did in Athens, hinting he thought it would be hard to reproduce the 20-medal haul in Beijing.