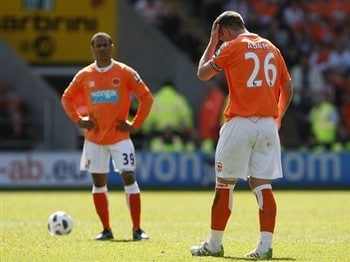 Blackpool players DJ Campbell and Charlie Adam get stuck into each other after their draw with Tottenham Hotspur as tension builds at the relegation-threatened club.

Blackpool manager Ian Hollway said he had to intervene to break-up a row between the two following the 1-1 draw with Tottenham.

The Tangerines duo had already had an on-field argument after Campbell wanted to take the Seasiders’ second penalty moments after Adam had seen a spot-kick saved by Heurelho Gomes.

However, Blackpool captain Adam got his way and smashed the second past the Spurs goalkeeper before Jermain Defoe equalised and rescued a point for the home side at White Hart Lane.

But the row between between Campbell and Adam, whose dreadful challenge on Spurs Welsh star Gareth Bale resulted in a ruptured ankle ligament, continued on the coach journey home from London to Blackpool, in north-west England.

“It is a little bit upsetting for me that they care so much they ended up with a little row going on,” Holloway said.

“I had to sort out a feud on the way home between DJ and Charlie, but that is how much they care.

“I actually would have agreed with DJ if they’d asked me. I thought he should have taken it.

“But it just shows what Charlie is all about, that he had the bottle to want it straight after missing one.”

Holloway, whose side are battling to avoid relegation from the Premier League with two games of the season left was not too downhearted by the flare-up.

“The bottom line is that DJ wanted to win so badly, so did Charlie, and that is what it is all about,” Holloway said.

“You have to look at what is at stake. We are all so desperate to stay in this wonderful league.

“We had some things to say to each other in the dressing room afterwards. Everybody had something to say.