Is there no one out there to beat Black Caviar? 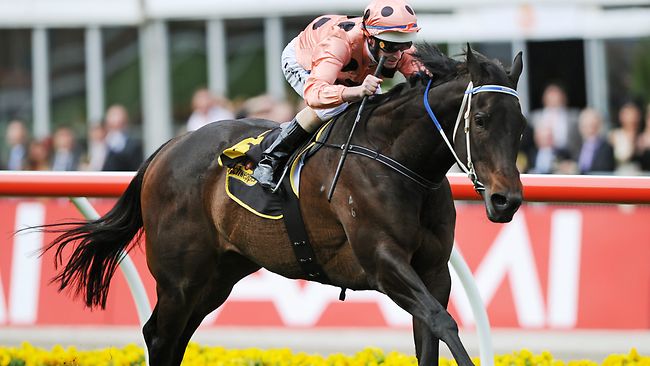 The Black Caviar show kept rolling at Moonee Valley when the champion mare cruised to her 15th consecutive win.

Although she had just three rivals in the Group II Schweppes Stakes (1200m) and started at $1.03, trainer Peter Moody admitted to a few pre-race nerves.

“You don’t want to put the cart before the horse,” Moody said.

“It looked easy on paper but you’re always a bit toey.

“Luke (Nolen) took no risks and it’s the best she’s begun for a while which was pleasing.

“It’s a wonderful story, a dream come true. It’s just great to see the joy she brings to people.”

Fears former barrier rogue Here De Angels would upset proceedings were unfounded as he behaved himself in the gates.

Black Caviar tracked her stablemate Doubtful Jack to the turn then took over to give the crowd what they came to see as she stretched out in the straight.

She beat Doubtful Jack by six lengths with Here De Angels another 1-1/4 lengths third and former Horse of the Year Scenic Blast fourth.

Her jockey Nolen said riding the mare was a humbling experience.

“It’s a humbling experience and great just to be a part of it.

Meanwhile, French raider Americain showed he was on target to make it back-to-back wins in the Melbourne Cup with a dominant victory in the Group II Moonee Valley Cup.

Americain eased from his opening quote of $2.80 to start $3.50 favourite on Saturday but was ridden brilliantly by Gerald Mosse who got him off the fence before the home turn.

Once in the clear he powered away to score by 2-1/2 lengths from Caulfield Cup placegetter Tullamore ($4).

“He is a special horse,” said managing owner Gerry Ryan of Americain who is unbeaten in three starts in Australia.

“Hopefully in ten days time we can see it (the Melbourne Cup win) being repeated.

“We’ll leave tonight knowing that we have a serious horse.

“Last year we had a champion (So You Think) to beat but this time they have to beat him.”