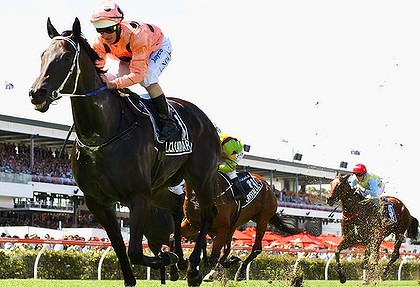 The near impossible, that world champion sprinter Black Caviar might still be improving, is possible according to trainer Peter Moody.

“I’ve said all along that she’ll be at her best at five and I still believe it,” Moody said after Black Caviar scorched around the back of Caulfield racecourse in an 800m jump-out on Tuesday.

Black Caviar dashed over the trip in 46.34 sec, about three seconds quicker than the 12 other 800m jumpouts.

“I’ll either be proven a genius or a mug in the next three weeks.”

But this campaign, which starts at Moonee Valley and concludes at Royal Ascot in June — with two runs over the uncharted distance of 1400m in between — represents a raising of the bar.

Neither Moody nor jockey Luke Nolen believes the step to 1400m in the Orr and Futurity Stakes, both run at Caulfield in February, will make her vulnerable as her career heads towards un unbeaten stretch of 20.

If she wins the Australia Stakes (1200m) at Moonee Valley on Friday week, Black Caviar’s unbeaten run will reach 17.

“I guess the additional spice of this campaign is she’s stepping to 1400m for the first time — there are more challenges and more unknowns — but I think she’ll adapt to the 1400 really well, especially at home (Caulfield),” Nolen said.

“In fact I think she’ll run it on her ear. She’s just so relaxed, there’s no way she’d rip and tear. Trainer, Jim Conlan always said to me when I was a junior jockey that any horse who can run a strong 1200 metres up the straight (at Flemington) would be perfectly suited at 1400m and we all know what Black Caviar can do up the straight.”

Black Caviar’s appearance before the trainer’s tower at 7.30am on Tuesday prompted admiring comments from a large number of onlookers who had come to see her trial.

Her size, muscled-up maturity and healthy summer coat had trainers and jockeys convinced she was at her physical peak.

Moody confirmed this training campaign had been the first without niggling setbacks for Black Caviar.

He said she was about 10kg above her usual racing weight.

Nolen said a strong head wind meant Black Caviar ran slower time in the jump-out than she had in identical trials at the start of previous campaigns.

“You’ll find her last furlong was pretty quick though,” he said.