Greg Inglis and his OBVIOUS knock-on 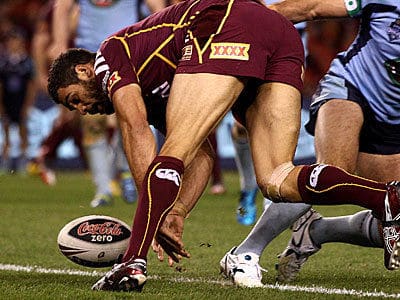 It’s the Hollywood ending nobody saw coming – referees coach Bill Harrigan is fighting to save his job after losing the support of the game’s top whistleblowers.

NRL boss David Gallop has confirmed he took hold of a document listing Harrigan’s failures as refs coach after a secret meeting with Brad Fittler and two referees yesterday.

It’s understood that the referees believe future development is in danger if Harrigan continues in the role.

Their frustration bubbled over following Harrigan’s direction for them not to comment on the decision to award Greg Inglis a try in last week’s State of Origin – the GI joke clanger – a decision the referees privately agree was wrong, but which Harrigan has justified.

Gallop has passed the document to Harrigan’s immediate supervisor Nathan McGuirk for review but would not be drawn on likely outcomes.

“There’s certainly some issues that we need to look into and we’ll do that,” Gallop said.

It is almost certain Harrigan and co-coach Stuart Raper will be moved into different roles with Russell Smith or Tony Archer replacing them.

“I catch up with Freddy from time to time about various issues and he asked me to meet him and a couple of referees,” he said.

Fittler was reluctant to say too much but confirmed it was to discuss growing dissatisfaction with Harrigan.

“I’ve had a bit of a relationship with the referees, taken a bit of an interest, purely for the interests of the game,” Fittler said.

“The way I see it, the game needs massive refinement and it isn’t happening. It’s at a critical stage where we need the best people in the right positions.”

Gallop flew to Wagga Wagga after the meeting, but not before ordering McGuirk to open an immediate investigation. The final frustration for the referees was how Harrigan has managed to justify Inglis’s try, ruling it the result of a “rebound”.

Harrigan insisted the decision was correct when he met Gallop for a “please explain” on Tuesday night.

Audio of the referral in the video referee’s box reveals debate over whether Blues hooker Robbie Farah deliberately or accidentally knocked the ball loose from Inglis’s arm.

Amazingly there was no discussion on the ball touching Inglis’s arm once it came loose.

The following morning Harrigan made no reference to Inglis’s second touch in a radio interview with Triple M’s The Grill Team.

Yet later that day Harrigan, for the first time, focused on the second touch and declared it a “rebound” – a ruling drawn from others areas of the rulebook but not directly connected to the laws on try scoring.

Buford Balony says: It’s about time. Anyone who thinks that Inglis scored in the Origin should have nothing to do with refereeing as it is the worst decision in Origin history !