Fevola will try to play for VFL club 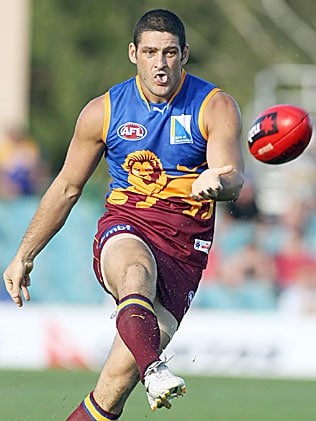 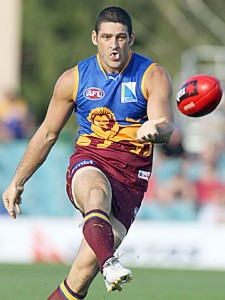 BRENDAN Fevola will return to Melbourne following his sacking from the Brisbane Lions and may seek a lifeline at a VFL club.

The revelations come from Collingwood president Eddie McGuire, who has been in contact with Fevola via text messages since the troubled footballer was told by Brisbane coach Michael Voss he was cut from the Lions’ list.

The news came as incidents on Brisbane’s trip to China last year were revealed as possible breaches that led to Fevola’s sacking.

McGuire said this morning Fevola was unsure where his future lay and was still considering trying out as an NFL punter.

“He doesn’t know what to do now with his football life,” McGuire told Triple M’s Hot Breakfast.

“Because of the current rules of AFL he can’t go on to a list even though he’s been sacked which is something that I think if I was his manager I’d be hitting the AFL up (on).”

“I’d be also hitting them pretty hard with maybe unfair dismissal in this situation as well, however he should get his payout which is around the 1.4 (million) plus a couple of hundred thousand from Carlton who are still playing into his contract at the Brisbane Lions.

“He could (get on an AFL list) next year but if you’re 30 years of age you don’t want to be out of football for a year, do you?”

“So it will be interesting to see whether or not Brendan will try to, I know he’s thinking of and asking various people about whether or not he can go onto a VFL list.”

But McGuire ruled out Collingwood picking up Fevola if he became available in the future.

“I don’t think he’s in our plans,” McGuire said.

As Fevola’s management remained frustrated and disappointed by the lack of transparency by the Brisbane Lions yesterday, it has emerged Fevola missed a morning team meeting after a night out in Shanghai with teammates.

He was also ejected from a nightclub in Shanghai.

Asked if missing a team meeting was a breach, Lynch said: “I’m guessing so. I couldn’t imagine there is anything else.”

The latest revelation adds to a long list of Fevola indiscretions.

Several members of the AFL Commission, including chief Mike Fitzpatrick, were in China for the exhibition clash against Melbourne.

Fevola was in party mode on the trip, despite only days before being welcomed back to the fold at the Lions after a club suspension.

He was told to leave a Shanghai nightclub, owned by a Melbourne supporter, where both clubs were drinking. The Lions yesterday refused to detail the “multiple serious breaches” that led to Fevola’s career being emphatically ended.

“It is extremely disappointing,” Lynch said last night. “It’s something I’ve been pushing for since last night, the detail of those breaches.

“It’s more than fair that we ask for clarification.”

Fevola, 30, could remain in rehab for another week.

“It really hit like a ton of bricks on Sunday night, but today he woke up and it started to sink in his career is over,” Lynch said.

The AFL, meanwhile, has strongly denied it had any involvement in Fevola’s demise.

“It’s a matter for the club and we haven’t tried to influence the Lions’ decision one way or the other.”