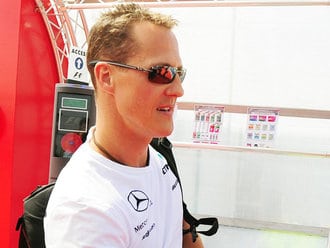 MICHAEL SCHUMACHER has apologised to Rubens Barrichello over his dirty 190mph swerve – by text. 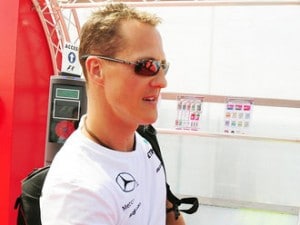 The seven-time champ did not bother to walk 50 yards from his Mercedes motor-home in the Spa paddock to Barrichello’s to make a personal apology.

The duo were at the track for the first time since Schumacher almost forced his Williams rival into the wall at the last race in Hungary nearly a month ago.

And the German, 41, still defended the way he moved across as his former Ferrari team-mate tried to overtake him.

Schumacher said: “I have no problem to speak to Rubens. There were two reasons I sent him a text. This is his 300th grand prix and we have quite a history together.

“I thought it appropriate to congratulate him and clarify, because he felt I wanted to push him against the wall, that was not my ambition.

“If he felt pushing him into the wall was the case then I am sorry for that.”

Schumacher was forced to apologise by his Mercedes bosses after being hit with a 10-place grid penalty for Sunday’s Belgian GP by the stewards.

But the struggling Swiss-based racer would have improved his damaged reputation had he bothered to say sorry face-to-face with the veteran Brazilian.

Barrichello, 38, was furious after coming within inches of slamming into the concrete barrier as they raced down the home straight.

He blasted: “If he wants to go to heaven before me he can. I don’t want to go there yet!

“It was the most dangerous move against me that I’ve ever been through. It was horrible.”

But he graciously accepted Schumacher texted remarks as he prepared to become the first F1 driver to reach the 300-race mark.

Barrichello added: “I received a message from him, an SMS.

“Somebody said to him that I was under the impression he had pushed me on to the wall and he said it wasn’t the case and he apologised for that.

“I just said ‘thank you, no problem.’ I accepted it and wished him a good weekend. Life goes on.”