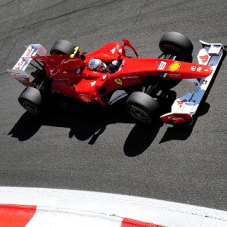 Fernando Alonso secured Ferrari’s first pole position for 31 races as the team firmly put behind them the team orders controversy.

It was Brazil in 2008 when one of the team’s scarlet cars last led away the field, with Alonso securing this particular honour ahead of Sunday’s Italian Grand Prix, sending the fans wild at Monza.

Alonso is joined on the front row by McLaren’s reigning champion Jenson Button who finished 0.122 seconds adrift as his final flying lap was not quite enough.

It means there is no Red Bull on the front row for the first time in 18 races with Mark Webber and Sebastian Vettel forced to settle for fourth and sixth, sandwiching championship leader in McLaren’s Lewis Hamilton in fifth.

With president Luca di Montezemolo in attendance, Ferrari’s Felipe Massa will start third on a fine day for the Maranello marque. Mercedes’ Nico Rosberg starts seventh, followed by Nico Hulkenberg and Rubens Barrichello in eighth and 10th either side of Robert Kubica in his Renault.

Unusually for McLaren the team ran a split strategy that will now remain for Sunday’s race, with Button opting to use the f-duct, and Hamilton preferring to run without it.

The f-duct normally aids straightline speed, but in Monza’s case it is assisting through the sweeping curves that adorn the famous old circuit.

The compromise is that Hamilton is running with a lower, flatter rear-wing which does improve speed along the straights, although it makes the car more difficult to handle. With such a relatively low position on the grid it appears the 25- year-old may have already compromised his race.

Adrian Sutil starts 11th in his Force India after missing out on a place in the top 10 by just 0.057secs to Barrichello at the end of Q2.

For the 11th time in 14 races this season Michael Schumacher found himself out-qualified by team-mate Rosberg, with the seven-times champion down in 12th. Sauber’s Kamui Kobayashi will line up 13th, with the Toro Rossos of Sebastien Buemi and Jaime Alguersuari 14th and 16th, sandwiching the Renault of Vitaly Petrov.