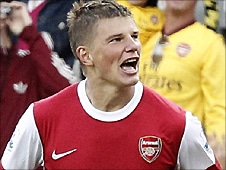 Andrey Arshavin grabbed the winner for Arsenal as they showed the steel needed to overcome a combative Blackburn.

Arsenal took the lead when Theo Walcott rounded off a slick move by powering a an angled shot.

Arshavin drove in a shot after a Cesc Fabregas effort was deflected into his path for the winner as the Gunners held on to complete a hard-fought win.

Arsenal boss Arsene Wenger wanted his side to send a out a message that they were capable of dealing with the type of physical approach Blackburn would adopt and seen as a Gunners weakness.

And, after weathering the Rovers onslaught and earning the right to play, Wenger will be encouraged by the character his team showed to come out on top.

Blackburn had not taken long to test Arsenal’s resolve as the visitors nervously cleared when keeper Paul Robinson launched a free-kick into their box before visiting keeper Manuel Almunia caught a long throw hurled into his six yard box.

It set the tone for an aerial bombardment on the Arsenal goal but, in the opening skirmishes, the visitors almost dealt Blackburn a blow when an Abou Diaby shot pin-balled off an unwitting Vince Grella and Robinson to safety.

But Blackburn were in forceful mood and defender Ryan Nelsen had a header cleared off the Arsenal line by Fabregas, while Almunia was forced to palm away from under his crossbar after Christopher Samba headed on another long throw.

The clash of two styles made for a fast and furious game with some unrelenting action as both teams strived to wrestle the upper hand.

Samba headed just over from a near post from corner before Arsenal matched the substance they were showing with the type of style that makes them so pleasing on the eye.

Almunia played the ball out and, six passes later, Walcott ran on to Van Persie’s measured ball and took a touch before sending in a shot at the far post.

However, while Wenger might have been fearing the type of ‘rugby’ tactics he talked about ahead of the game, Rovers produced the type of penetrating move Arsenal would have been proud of.

Samba produced some nifty footwork belying his six foot four stature before releasing El-Hadji Diouf, who surged past Laurent Koscielny on the left and passed for Mame Biram Diouf to tap in.

Robin van Persie became Arsenal’s first casualty as he was forced off with an ankle injury but the visitors’ passing game was slowly came to the fore against the more direct style of Rovers.

They restored their lead when Arshavin drove in a shot after a Fabregas shot from a Bacary Sagna fell into his path.

Arsenal had a degree of control as they dominated possession and, although Blackburn were struggling to impose themselves, they still carried a threat.

Nikola Kalininc blazed high after a mistake by Thomas Vermaelen but the home side’s attacks had become few and far between.

Jack Wilshere missed a great chance late on, although it would only have put the gloss on Arsenal’s first away win since March.