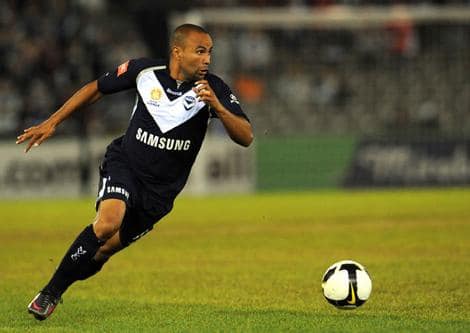 Thompson, who has played in three title deciders, winning two of them, has likened Saturday night’s season kick-off against Sydney FC as “grand final level” and says he’s as nervous as he’s ever been heading into a season.

“I sometimes go home and think wow, we’ve got Harry Kewell,” Thompson said. “And that’s for me, I’ve played with him for a long time with the Socceroos. To be honest, a lot of the players hadn’t played with Harry; they were starstruck. A lot of them grew up idolising him. It was a bit standoffish at the start, but now he’s one of the lads.”

Thompson, who famously scored five goals in Victory’s maiden grand final win over Adelaide United in 2006-2007, says Saturday night’s blockbuster is “right up there” with the biggest club games he’s been involved in.

“I feel like we own them one still after losing the grand final a few seasons ago (in a penalty shoot-out in 2009-2010). And then there’s the added spice of Harry Kewell, Brett Emerton.

“I can’t think of a better way to start the season.”

The Socceroos striker is an A-League veteran, having been involved in the competition since its inception. But he admits even he is nervous heading into the most highly anticipated season since 2005.

“Each year you roll into it, but this year, for me, is one of the most exciting ones, with the players we’ve got back and the level of football now.

“Brisbanehave stepped it up – we’ve got to compete with that now. It’s only going to get bigger.”

Victory coach Mehmet Durakovich has an embarrassment of attacking riches at his disposal this campaign and Thompson couldn’t hide his excitement at his side’s potential for this campaign.

“Up front, when you look at Harry, Carlos (Hernandez), (Marco) Rojas, (Jean Carlos) Solorzano, (Tom) Pondeljak, myself, (Danny) Allsopp; any team in the A-League would like one or two of those, but we’ve got six or seven,” Thompson said.

“What we want now is someone for the back. We were close to getting (Melbourne Heart’s Simon) Colosimo and a few other things that didn’t pan out.

“We’re very fortunate that we’ve got the talent that we do up front.”

And with that talent on show, plus the Kewell factor, Thompson is expecting fans to flock to Etihad Stadium this year.

“We’ve always have passionate supporters group, even without Harry. But with Harry there …  it’s going to bring a new set of supporters in that don’t necessarily followed out sport, but follow Socceroos or Harry.”

Buford Balony says: Could be a worse signing than Culina, because we all know Kewell will only play a couple of games and then not play because of some garbage injury that wouldn’t stop most people from playing.

I think Emerton is a far superior signing.