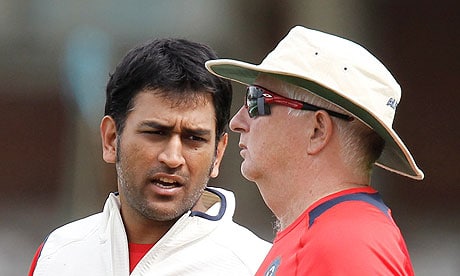 ANZ Stadium is about to host its first international game but neither Australia nor India is happy about training at the ground in Sydney’s west.

India’s coach Duncan Fletcher blew up when he arrived at the ground on Monday morning and discovered the stadium’s practice wickets were damp.

He had an angry clash with former Adelaide Oval curator Les Burdett, who has been brought in to prepare the drop-in wicket for tomorrow night’s first Twenty20 international at the stadium.

India then demanded that Tuesday’s training session be moved to the Sydney Cricket Ground. The SCG Trust, which is in competition with ANZ Stadium, relented and let the visitors use its facilities but is now having to find room for the home side as well.

The Indians aren’t alone in their unhappiness with the facilities, with Australia deciding on Monday night they too would not train at the ground on Tuesday.

The Australians trained at the SCG on Monday and had planned to use ANZ Stadium on Tuesday before pulling out, although they had not confirmed the switch on Monday night.

The drama is a blow to the stadium and Cricket NSW who are hoping to attract big-ticket World Cup matches to the venue.

Cricket NSW chief executive Dave Gilbert described the issue as a “storm in a tea cup”.

“I spoke to Les Burdett and he said the Indians arrived at 9am and the wickets weren’t ready because it is a very early time to be training and most wickets at that time will be a little moist,” Gilbert said last night.

“They were a little damp because of all the rain but by mid morning the Indian team were doing throw downs on the wicket and by the end of the session they were conducting a normal batting and bowling session.”

Burdett said the practice wickets in the western corner were the problem.

“The centre pitch dried out beautifully, but the ones in the pocket don’t get as much sun or air flow and hold a bit more (water),” he said.

“There were some concerns from the Indians. I spoke with Duncan Fletcher, he understood the predicament but obviously he was disappointed, and rightfully so. He wanted firm pitches, but with the elements and all the rain around, we were unable to deliver.”

“I think this one won’t cause any gremlins,” he said.

“I wouldn’t be playing on it today but certainly tomorrow it’ll be ready, which means it’s a day early, so if we do get some inclement weather we’re ready to go.”

Burdett said a multi-purpose venue such as ANZ Stadium represented the future of cricket in Australia.

“The more we can use our stadiums, the better it is for everybody. It’s a no-brainer,” he said.

ANZ Stadium is also unpopular with AFL football teams because of its shifting surface.

On Monday Collingwood president Eddie McGuire described the surface as the worst in the game.

Buford Balony says: What a surprise, the Indians complaining because the facilities are soooo gooood in India, about as good as their cricket team. Also what a surprise Eddie gets involved, because he’s the Indian equivalent in Australia, a whinger who never shuts up.