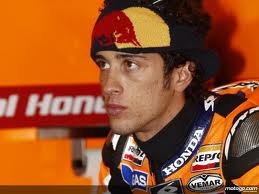 Pedrosa was forced to abandon his championship hopes when he fractured his left collarbone in a Friday afternoon practice crash. The only rider able to challenge Jorge Lorenzo (Yamaha) for the title flew back to Spain, where he was expected to have surgery to plate the damaged collarbone. A date for his return to racing has not been set.

In his absence, Dovizioso stepped up, the Italian picking the perfect time to perform above even his own expectations and achieve pole position. The front row start was only his second, to go with a third place qualifying effort in this year’s United States Grand Prix at Laguna Seca.

Dovizioso lapped the 4.8km track 60 miles north of Tokyo with a time of 1m 47.001s. Dovizioso had posted his fast lap with nearly six minutes remaining in the one hour qualifying session, which made him vulnerable to attack. But the mark was out of reach of the rest of the 16-rider MotoGP field and Dovi had reason to celebrate.

Randy de Puniet (LCR Honda RC212V) had put his name at the top of the order earlier and hoped to be on the front row. He was on a flyer late in the session when he ran wide and into the turn one gravel trap. The Frenchman stayed upright, but any hope of a front row start was gone. Instead he’ll start from seventh on row three and just in front of Marco Simoncelli (San Carlo Honda Gresini RC212V). De Puniet said he was finally back on form after breaking his leg at the German Grand Prix in July and he chose to use race tyres to find a good race setting, rather than one outright fast lap on a soft tire.

Simoncelli wasn’t happy to see the chequered flag. On his first visit to Motegi on a MotoGP machine, he found speed throughout the hour, turning in his best performance with his last lap. The team needed more time to work on a race setting, as the Italian said he was losing time in the final section, which includes the circuit’s longest straightaway.

Team-mate Marco Melandri (San Carlo Honda Gresini RC212V) found the qualifying session difficult with a recurrence of many of the same problems he’s had all season, on top of which he was suffering from a fever. The weather forecast for Sunday was mixed, and Melandri was one of the few riders hoping for inclement weather, which he felt would be an equalizer.

Hiroshi Aoyama (Interwetten Honda MotoGP) was disappointed to qualify 14th in his first home grand prix in the MotoGP class. Aoyama had been an encouraging sixth in Friday practice, but that form didn’t follow him into qualifying. He did improve on his Saturday morning time, which would be more indicative of his race pace, rather than the time he spent on the softer rear tyres.