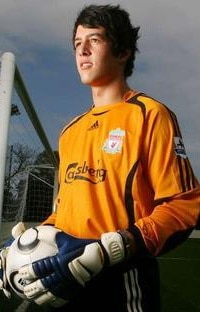 Dean Bouzanis, the Australian goalkeeper once rated by former Liverpool boss Rafael Benitez as ‘the best goalkeeper in the world for his age’, says training everyday alongside Pepe Reina at Liverpool makes him hungry to go to the next level – at Anfield and in the green and gold.

Bouzanis, 20, was part of Holger Osieck’s Emerging Socceroos squad that assembled in Germany recently, and the highly rated custodian starred in a friendly against Borussia Monchengladbach during the camp.

Bouzanis, who arrived at Anfield as a 16-year-old, and who has returned to training with Liverpool reserves buoyed by a successful national team camp, had a glimpse into life at the Barclays Premier League club.

“I have to pinch myself now and then because I am at such a big club.

“I know how fortunate I am. My dream was always to come over, but to come over at such a young age and get all my development from Liverpool Football Club is just quality, that’s why I work hard every day.”

Bouzanis rates Spanish goalkeepers as the best in the world, so learning off Reina every day is something he relishes.

“I’m very lucky to have Pepe (Reina) with me at the club,” Bouzanis said.

“He’s a fine example for me to look up to. He’s professional on and off the pitch. Everything he does is just spot on.

“It’s a privilege to learn off someone that’s so good.

“You learn so much. Even things you think might not work that he does – you try it and then you realise that it’s quality. You pick up little things he does.”

Training every day in the competitive hot bed of Premier League football has Bouzanis determined to take his career to the next level.

And despite Mark Schwarzer showing no signs of slowing down, Bouzanis wants to state his case as a stand out in the chasing pack as he dreams of one day standing between the sticks for the Socceroos.

“Even from when I was younger, I’ve wanted to be part of the Socceroos one day and it will never change,” he said.

“I’m always hungry to get to the next step.

The week spent training under Osieck’s watch in Germany has Bouzanis itching for more international action, and he says the camp, as well as Osieck’s faith in blooding young talent such as striker Brent McGrath and fellow goalkeeper Mitchell Langerak, has inspired the Socceroos’ Generation Next.

“Holger had a hands on role; he was telling us to play without fear, play our normal game and he was always interacting with the players,” Bouzanis said.

“It’s nice to hear from the manager; what his thoughts are, what he’s thinking. It gave me a lot of confidence from the start.

“Hopefully there are other opportunities I can be involved in the national set up because the camp made me hungry to stay there.”

“It just shows that the manager is willing to put young players on if you’re good enough.

“It gives us players drive to do the same thing.”

Bouzanis did not get to join the senior Socceroos squad in camp, but he has enjoyed advice from Mark Schwarzer – the man whose jersey he aspires to claiming one day.

“I played against him in the FA Cup (when I was on loan) at Accrington,” Bouzanis said.

“We swapped jerseys … he knew I was Aussie and he took me under his wing a bit and gave me a lot of confidence.

“He said you need to keep playing, doing well, these are the stages where you learn football so try and learn as much as you can.

“He was really supportive and I thank him for taking the time after the game to come and speak to me. It just shows what type of guy he is.”

Next on Bouzanis’s radar is a call-up to the Olyroos side, the next stepping stone in his international career.

“My big short-term goal is to play in the Olympics. We’ve got two qualifying games in June if we want to get anywhere near it.

“After the Olympics, it’s the Socceroos.

“There’s nothing in between.

“You’re either good enough, or you’re not.

“You have to do well for your club and get noticed, and if you do that you’ll give yourself every chance to make that step.”