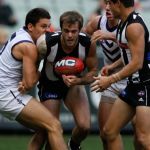 Collingwood are still top of the AFL ladder after a comfortable win over Fremantle at the MCG, and they looked more than a contender a Grand Final place.

Led brilliantly by Brownlow Medallist Dane Swan, who ended the match with 43 possessions, seven tackles and two goals, the Magpies set up the win with a dominant opening term when they kicked three goals while the Dockers could manage just two points.

The game started with both teams pushing extra men into defence. Heath Shaw was patrolling the Fremantle backline for the Magpies, while Michael Johnson was the extra man in defence for the Dockers, who were smothered by the Magpies’ tactic.

Despite the congestion the Magpies were able to break through the additional numbers.

Chris Dawes kicked the first goal of the match after he took a strong contested mark over Alex Silvagni.

While the Magpies were able to kick additional goals through Tyson Goldsack and Swan during the term, the Dockers managed just one mark inside their 50-metre zone with their forwards and in particular captain Matthew Pavlich having little opportunity in front of goal.

After the Magpies kicked the opening six goals of the match, the Dockers finally got their first major score of the day when Chris Mayne marked late in the second term and then kicked truly for goal.

When Fremantle coach Ross Lyon finally pushed Johnson out of defence to allow the Dockers to run with their opponents, things started to change.

They kicked six of the next eight goals and from a deficit of 40 points cut Collingwood’s lead back to 17 points midway through the third quarter.