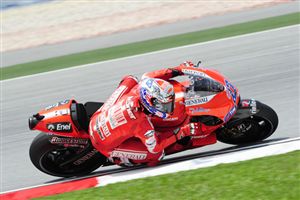 On the day of his 25th birthday, Casey Stoner took his third pole position of the season with the best time in qualifying for the Iveco Australian Grand Prix of 1’30.107 today, securing top spot on the starting grid at Phillip Island for the third consecutive season.

The Australian, who has also won his home GP for the last three years, was an impressive 0.668s clear of the rest of the field by the end of the session.

With conditions changeable throughout the day, only the final few minutes of the MotoGP qualifier was lost to light rain, although some spots had fallen during the hour despite the bright sunshine around the coastal circuit. Stoner admitted, “We have had virtually every single condition you could imagine thrown at us this weekend so we’ll have to wait and see what happens tomorrow before we make any decisions on set-up, but so far I think we have done the best possible job in every condition. We’re in the best possible position for tomorrow so I’m pretty happy so far.”

World Champion Jorge Lorenzo (Fiat Yamaha) was the only rider able to get within a second of Stoner, as the Spaniard joined his rival under the 1’31” barrier. Lorenzo briefly led the session with his time of 1’30.775 but eventually had to settle for second on the grid.

Achieving his third front-row start of the season, Ben Spies set the third best time of the session, the Monster Yamaha Tech 3 rider decided to call an early end to his practice after setting a lap 1.279s off the pole time of Stoner.

Hot on the heels of the American and registering a best qualification of the season to date was rookie Marco Simoncelli (San Carlo Honda Gresini), at just 16-thousandths of a second behind in fourth. Colin Edwards (Monster Yamaha Tech 3) was a similar distance (0.013s) further back in fifth, with Nicky Hayden (Ducati Team) taking sixth position in the session despite crashing at turn four towards the end once the rain began to fall more heavily.

Randy de Puniet (LCR Honda) will head up the third row after setting the seventh fastest time, with Valentino Rossi (Fiat Yamaha) failing to overcome the issues he experienced in both free practice sessions and qualifying in eighth, which is his worst starting grid position of the season to date. Andrea Dovizioso (Repsol Honda) and Marco Melandri (San Carlo Honda Gresini) completed the top ten.

The injured Dani Pedrosa (Repsol Honda) qualified in 15th position despite only having just returned from Spain having undergone surgery on the collarbone he fractured in Japan. However because of the pain, Pedrosa and his team decided that he will not race in tomorrow’s Grand Prix, preferring to rest up before the Portuguese event in two weeks’ time.

Héctor Barberá (Páginas Amarillas Aspar) and Loris Capirossi (Rizla Suzuki) both crashed during the session and qualified in 16th and 17th positions respectively. Both have suffered muscular injuries and will undergo fitness tests before the race.