Can the Italians do Wallabies a favour 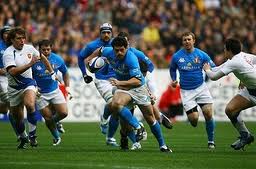 The Wallabies won’t mind at all that Italy earnestly believe they can bring down Ireland on Sunday to upend the Rugby World Cup quarter-final draw.

An Azzurri win over the Emerald Green in Dunedin would spare the Wallabies back-to-back sudden-death clashes with South Africa and New Zealand.

Instead of needing to repeat their Tri Nations heroics against the world’s top two ranked teams, the Wallabies would fancy their chances of downing Wales or England or France to reach the October 23 Rugby World Cup final.
So having Italy truly believe is certainly reassuring.

“Ireland are a side that really played so well against Australia. They beat Australia physically. We have a better front row than Ireland and again we’re going to try and prove that,” Azzurri coach Nick Mallett said. If you’re on the front foot, it makes it more difficult for them.”

Wallabies coach Robbie Deans said the Italy-Ireland showdown would provide a fascinating finale to the group stages of the tournament.

“Obviously it will be interesting in terms in how the playoffs fall,” he said. The Irish know what they’re going into. It will be a great conclusion to the round-robin. The great irony in all of this, is Ireland could miss out yet. We could miss out yet. There’s a lot more water to go under the bridge.”

Despite Italy’s short five-day turnaround from Tuesday night’s 27-10 win over USA, captain Sergio Parisse said his side would tackle Ireland with a great deal of confidence.

Confidence no doubt stemming from the two teams’ most recent encounter when Italy dominated for the most part before Ronan O’Gara’s late drop goal earned Ireland a 13-11 escape in the Six Nations in Rome in February.

Even Ireland’s most successful ever coach, Eddie O’Sullivan, who is now at the helm of USA, thinks Italy have the capacity to turn the tournament upside down.

You don’t need me to tell you – as they proved in the Six Nations…Italy is capable of beating any team, O’Sullivan said.

“It’s pretty obvious Italy can take the game to Ireland and it will be a tight contest.

It must be pointed out that Ireland…whose 15-6 victory over Australia two weeks ago in Auckland left the Wallabies so precariously placed…have not lost to Italy since 1997 and have won 16 of their 19 encounters.

Italy’s incentive, though, is big – success against Ireland would thrust the Azzurri into the Rugby World Cup quarter-finals for the first time.

“We will have to score points however we can,” said veteran Italy flanker Mauro Bergamasco. It is the chance for all 30 players to do something no-one has ever done. We have five days to recover physically and mentally and be ready for this huge battle.”