Boxing is corrupt and it’s out of control 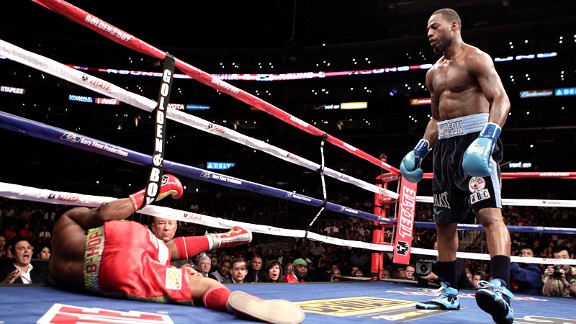 The referee stopped the fight at 2:48 of the second round and awarded Dawson the victory after Hopkins appeared to injure his right shoulder in a fall at Staples Centre.

Hopkins, 46, had jumped on Dawson’s back during a clinch and then Dawson threw Hopkins backwards onto the canvas and he landed awkwardly on the right shoulder.

Hopkins complained bitterly about the decision to call it a TKO, which marked the first time in his career he was stopped inside the distance.

He was also angered by an exchange with Dawson in the ring which took place near one of the neutral corners.

“This isn’t the UFC or MMA,”Hopkins fumed.

“It should have been no contest. He threw me down with a foul.”

Hopkins lay on the floor for several minutes while his corner attended to him. Dawson then walked over and yelled at Hopkins as the crowd at Staples Centre booed the bizarre scene.

As he hit the canvas, Hopkins’s head brushed the bottom rope and his shoulder took the force of the fall. Afterwards Dawson said he thought Hopkins was faking an injury.

“He jumped on me and pulled me down,” said the 29-year-old Dawson, who taunted Hopkins for not continuing.

“I pushed him off with my shoulder. I wanted a good fight. I trained eight weeks for this. He was faking it. I wanted this fight for three years and he didn’t.

“He talks about being from Philadelphia and how he is gangster,” Dawson added.

“He is not gangster. Gangsters don’t quit.”

The two fighters barely had time to feel each other out before the surprise ending, combining to throw just 18 punches.

Dawson was the busier of the two in a slow moving first round, and the desultory pace carried over into the second.

It remains to be seen if this defeat sends Hopkins through the gates of retirement.

He became boxing’s oldest world champion in May when at 46 he won the WBC light-heavyweight title by unanimous decision over Canada’s Jean Pascal, who had taken the crown from previously undefeated Dawson in 2010.

Hopkins ruled the middleweight division for a decade from 1995 to 2005, the last four of those years as an undisputed champion.

He was middleweight champ for 10 years and made a record 20 successful title defences in his 23 year boxing career.

Buford Balony says: Another farce boxing match. No wonder MMA is taking over.