Black Caviar all around as the Champion Sprinter shows her class 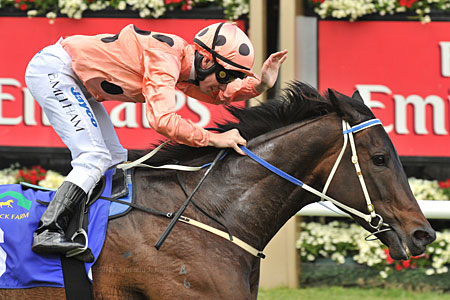 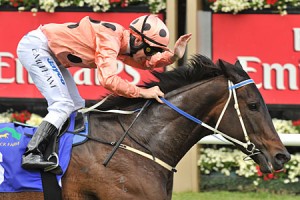 and a beating in the $1 million Newmarket Handicap at Flemington.

Under 58kg, the four-year-old daughter of Bel Esprit set a modern-day weight-carrying record for a mare in the 1200m feature sprint which was first run in 1874.

Black Caviar became the only horse in Australian history to win 10 races on metropolitan tracks from 10 starts and at $1.18 became the shortest-priced Newmarket winner, the previous shortest being Bernborough who won at the equivalent of $1.44 in 1946.

Again not fully extended by jockey Luke Nolen, Black Caviar scored by three lengths from Golden Slipper winner Crystal Lily ($71), who tried to lead all the way, with Beaded ($21) three-quarters of a length away third.

“She’s broken 33 (seconds) for her last 600 (metres). You wouldn’t like to be chasing her on foot, would you?,” trainer Peter Moody said.

“It’s been a big build-up and it’s nice to put it behind us. It’s just a great relief. This was the one chance you would think for the opposition to beat her, it’s probably the only chance the handicapper will ever get at her.

“Like I said last time, what do you say? You get lost for words. She’s just awesome.

“I just said to Luke, ‘Be as kind as you can for as long as you can, you don’t have to be three (lengths) in front at the furlong (200m), just be a half-inch in front on the line’.

“It’s only two races down of maybe a six-run campaign, but she’s done a hell of a job.”

Black Caviar will be after her fourth Group I victory in the William Reid Stakes (1200m) under lights at Moonee Valley on Friday week before going to Sydney and then Brisbane.

Nolen combined with Moody for back-to-back Newmarkets having won the race last year with three-year-old colt Wanted, and said it was easy work.

“I let her travel just over halfway well on the bridle then just let her slide up,” he said.

“I went full bore just thinking with the 58kg and with a couple of others in it (it might be harder).

“I didn’t pull my neck out looking at the big screen today but when she went she went. She’s every jockey’s dream.”

Racing Victoria chief handicapper Greg Carpenter said he would be pushing for an international rating of 130 for Black Caviar.

The highest rating for a sprinter to date has been 125.

Her current rating of 123 is the highest since Oasis Dream in 2002 and equal to star Hong Kong sprinters Silent Witness and Sacred Kingdom.

The new ratings will be officially published in late March.

“Today she has given weight to some very good sprinters and still won by an extended margin and with the same ease she has in the weight-for-age races,” Carpenter said.

Buford Balony says: If you haven’t seen this horse run yet, you should…UNBELIEVABLE!!!!!!!