All Black drunken Zac locked up on Cook Islands 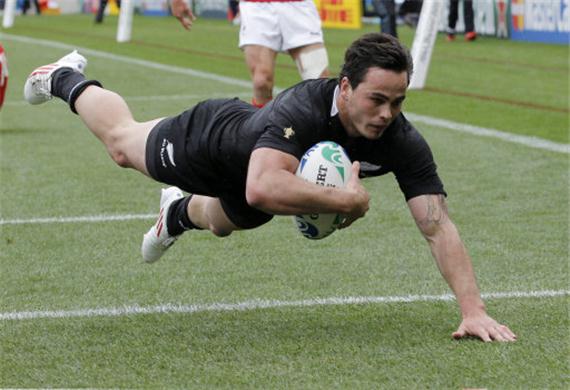 All Blacks winger Zac Guildford has apologised for a drunk and disorderly night in Rarotonga which ended with him being locked up in a police cell.

A naked and bleeding Guildford allegedly ran into Trader Jacks bar on the island on Thursday night, punching one man who asked if he needed help and then hitting another man at the bar across the back of the head.

TV reports on Monday said that Guildford had gone to the bar after escaping from police, who had picked him up after he got into a fight over lost scooter keys.

Police apprehended Guildford after the Trader Jacks incident and were taking him to hospital when he leapt out of the van and into a lagoon to try a second escape.

The attempt failed and he spent the night in a police cell, the reports said.

Guildford, who was in Rarotonga for the wedding of a rugby clubmate, later issued a statement apologising to bar patrons, staff and the Cook Islands people for his behaviour, and for embarrassing his family.

“I have no clear recollection of the events of that night but there is no doubt that my behaviour was unacceptable and I am hugely embarrassed by what happened,” he said.

Guildford has had well-documented alcohol issues and has appeared before the New Zealand Rugby Union three times in the last 18 months.

“I don’t want any sympathy for the situation I have ended up in, but I am thankful for the support I have received so far from so many people,” he said.

“It’s obvious that I need help and I want to get home and to get that help as soon as I can. I need to sort myself out.”

The NZRU says it will do all it can to help Guildford.

“He’s had some alcohol-related issues in the past and we’ve worked hard with Zac… Many people have, and we’ll continue to do so. He’s a good young man.”

Guildford was on leave, but the NZRU still expected players to take a commonsense approach to their behaviour and alcohol consumption, Sorensen said.