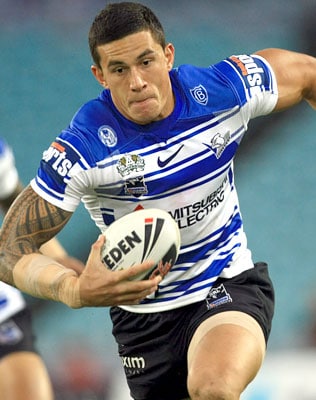 All Blacks star Sonny Bill Williams’s boxing opponent this weekend is under investigation after revelations he has been receiving a taxpayer sickness benefit for an injured elbow.

The South Aucklander dubbed the “Lard of the Ring” said a case of tennis elbow meant he could not find work, but the injury wasn’t bad enough to stop him getting in the ring with Williams in West Auckland on Sunday.

Liava’a is expected to earn $6000 for the fight, while Williams will make enough to donate $NZ100,000 to the Christchurch Earthquake Appeal.

Liava’a, who is also working on an album of gospel music, first went on the sickness benefit because of a problem with his voice.

But his doctor told welfare authorities he could not work because of his elbow injury.

“I’ll go and talk to them, so that they’re aware, because I thought it would be all right,” Liava’a said. “Plus I was too busy with training and music. But that’s a good idea. I should go talk to them and tell them.”

New Zealand Social Development Minister Paula Bennett said she found it remarkable that someone could have an injury so bad that he could not even look for work but be well enough to compete in a professional boxing match.

It is understood Liava’a’s benefit was due to be cancelled on June 17.

New Zealand’s Work and Income said it suspended Liava’a’s sickness benefit after he did not return the department’s phone calls.

“We determined his eligibility for the benefit based on a medical assessment and we will be reviewing this with the doctor next week.”

Williams’ manager Khoder Nasser said he did not know that Liava’a was a sickness beneficiary but that status did not matter.

“People have seen him (Liava’a) in the gym, training hard and doing 60 spars a week. So he looks fit and ready,” Nasser said.

“He could be bluffing, or anything, we just don’t know. But Sonny’s got his cut left hand, so he’s injured too. We are just training like usual.”